BT Group has rebranded, in a bid to highlight the range of technology services the company offers, aside from telecoms and broadband.

Red&White has designed a new visual identity for the global tech giant, in a project that has taken three-and-a-half years to complete.

BT Group, formerly known as British Telecom, was founded in 1969, originally as a telecommunications company, providing households with phone lines. It has since branched out into broadband and mobile, subscription television and more specialist IT services and operates in 180 countries.

The new look is part of a wider brand strategy to increase public awareness of the company’s more holistic services, such as its digital skills programme in schools, and its work on global cyber security, for which it has Adastral Park, a tech campus in Ipswich.

The rebrand also aims to draw attention to what the company is doing in terms of equality, sustainability and the environment – it has a target of using 100% renewable electricity globally by 2020, and has a relatively low gender pay gap of 6% compared to the UK average of 9.6%, and also gives more women than men bonuses.

“BT has been very British around shouting about its other services,” says Paul Franklin, creative director at Red&White. “We wanted to help the brand generate the confidence to tell these stories and change perceptions for the British public – it’s a tech brand, not just a telecoms brand.”

The new branding sees the previous logo of a blue, “BT” logotype accompanied by a multi-coloured globe symbol stripped away and replaced with a simple “BT” set within a roundel.

A bolder logotype has been incorporated, and the roundel provides white space within the symbol, which allows the logo to be printed over multiple backgrounds and used as a holding device for imagery, says Franklin. 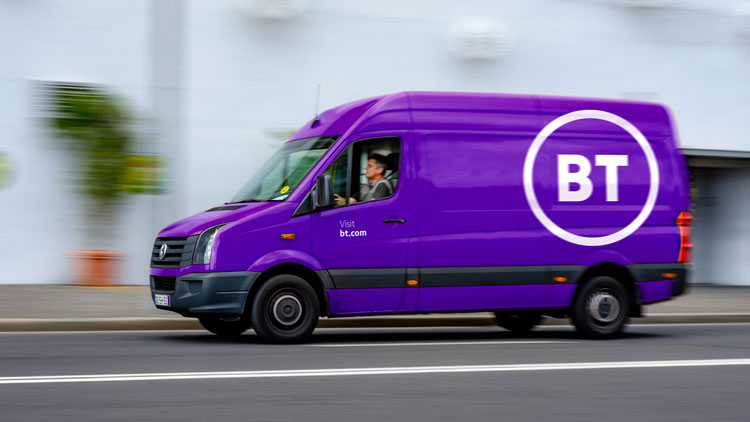 “The ‘global image’ of the world logo had become a bit tired,” he says. “We wanted to help make the organisation feel more modern by creating a clear brand mark that could sit on top of all the things that BT does.”

The core colour is now purple, which Franklin says has been used by the BT brand for several years, but there has been confusion and lack of clarity around this as the public associated the brand with blue.

“The brand has actually been purple for seven years, but customer research showed that people think it’s blue,” he says. “This is understandable given that the logo had blue lettering. The ambition was to move away from connotations of old-fashioned blue and towards purple instead.” 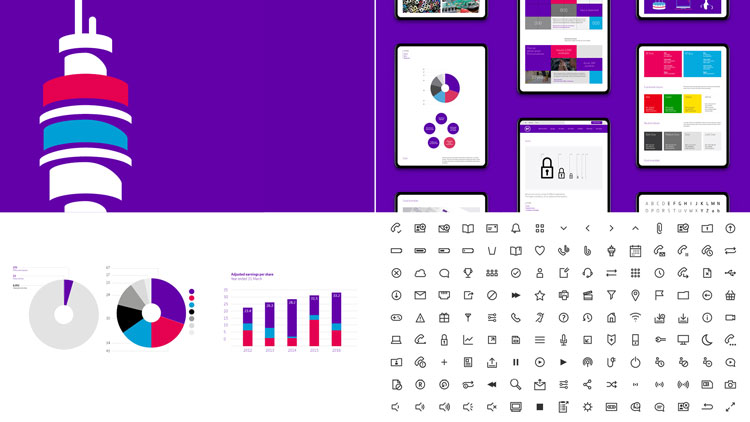 Alongside the new logo, the rebrand incorporates icons, and two styles of illustration, one that aims to be more “emotive” and another more “practical and informative”, used for technical diagrams such as on user guides.

Franklin says that the studio’s ethos around creating a new icon suite was conversely to “stop people using icons” – so it only designed a small set that were particularly clear in meaning.

“Our criteria was that if it’s instantly recognisable, we can use it,” he says. “A book represents an address book, and a tick represents connected [to the internet]. We only created ones where we felt you didn’t need a word to explain it – a simple set of elements that make sense. Otherwise, we used a word instead.”

The use of BT’s existing typeface, BT Font, originally designed by type foundry Dalton Maag, has been retained and used in different weights across all copy. 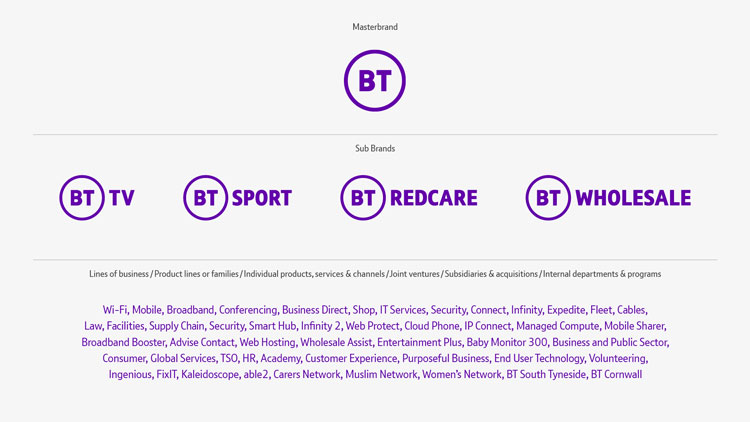 As well as the overarching BT Group brand, the new identity has been used consistently across BT’s four main sub-brands, which are BT TV, BT Sport, BT Redcare and BT Wholesale. These cover the TV subscription, sport channels, home security services, such as alarms and fire detection, and internet services, such as broadband.

All four sub-brands follow the same logo system of the BT logotype within a roundel, accompanied by the name of the sub-brand in the same type set to the right.

“We needed a simple mark that could live in different places,” says Franklin. “There were lots of different logos for different BT divisions – it needed a clear system and one master logo.”

The new BT branding is currently rolling out across all touchpoints, including digital platforms, print and digital marketing, user guides, product packaging, merchandise and office interiors. Its roll-out is being accompanied by a new communications strategy, which launches in the coming months and will look to promote BT as a “digital champion” and showcase its breadth of work, says Franklin. 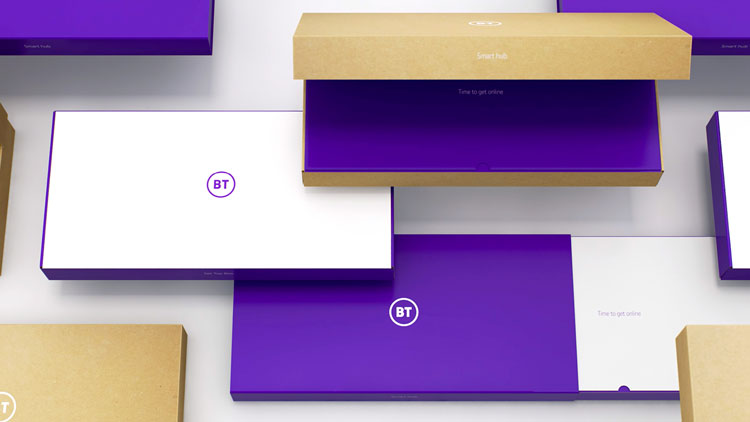 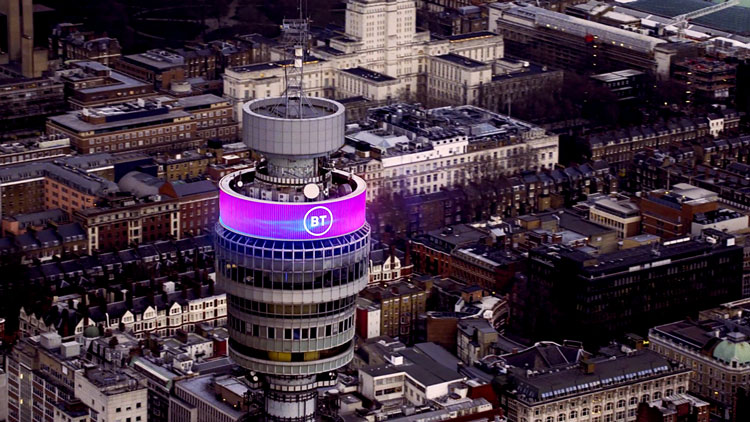 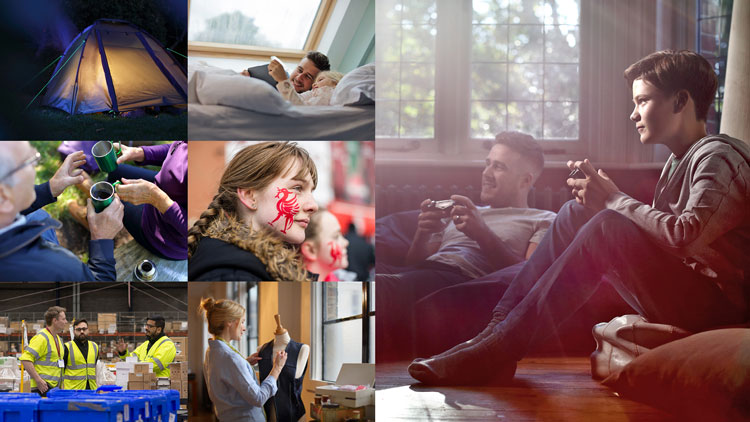 Design inspiration: the best studio projects from May and June