Designers faced increased job instability and loneliness from remote work as the pandemic continued into 2021, according to a wide-ranging career survey.

Design-focused social network Dribbble has revealed findings from its 2021 community survey, which surveyed over 13,000 respondents from around the world.

Of the total group, half are employed full-time in-house or at a consultancy. 18% are students and a further 17% are self-employed. Some 64% of respondents are male, while 34% are female.

Almost half are UI/UX designers, while around 30% cover graphics and branding. Around 4,800 designers were located in Asia, while 2,900 were Europe-based and 2,300 in America. 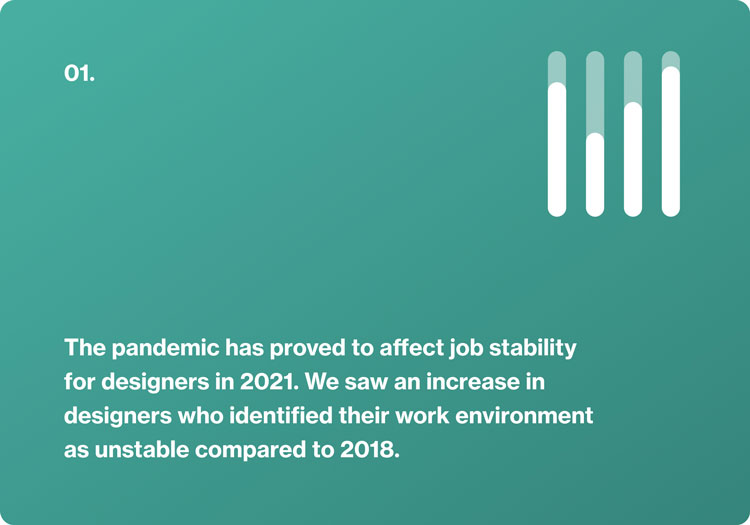 Job satisfaction scored lower with an average rating of 6.2 on a scale of “not at all satisfied” (1) to “completely satisfied” (10). Around a fifth of respondents are “working hard to find a next job” while 23% are “open to opportunities, but not actively looking”.

When it comes to the job search, competitive pay ranks as the highest priority for most designers (55%). Opportunities for flexible work hours – a trend consultancies have explored throughout the pandemic – comes in second (52%). Company culture (45%) and creative freedom (51%) also ranked highly.

How might designers achieve those next steps? Around 60% of respondents said that they had pursued a video course in the past year, while 37% had pursued a design course between 4-6 weeks long.

Workshops, either virtual or in-person, were popular among a quarter of respondents. Around 17% of designers had pursued one-on-one mentorship. More formal education, such as a university degree, was less popular – the route for only 12% of designers.

Earlier this year, we reported on university alternatives for graduates looking to break into the industry.

Business skills are a top priority for designers 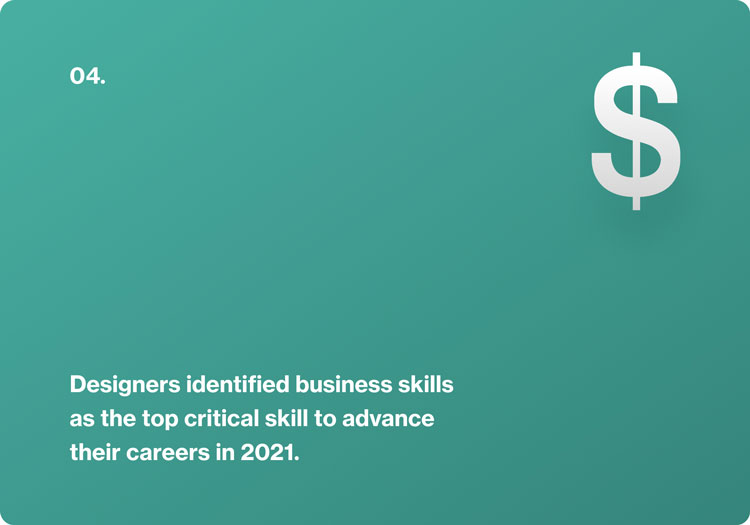 A third of designers said that business skills would be critical for career advancement in the next 2-3 years, while 30% said that motion and animation would also be important.

Communication (29%) and illustration (22%) were other focuses for designers. While talk of the metaverse and NFTs have dominated conversations of late, only 9% of designers said that AR would be critical, while 8% of respondents said VR would be critical.

How designers communicate with clients and colleagues has been a theme of the pandemic, as virtual collaboration took off. Among respondents, 45% still favour emails while 41% are also using remote design tool Figma as a way to communicate. Slack was another popular option, used by almost 30% of designers.

The verdict on remote working

One of the pandemic’s enduring consequences has been the shift to remote work, which has been a mixed bag for designers. The ability to set your own schedule was the highlight for 64% of designers. Other lifestyle bonuses such as no commuting, work-life balance and a casual dress code were also highly-rated benefits.

On the flipside, 38% of designers found it hard to separate work and personal time while 29% listed communication issues as one of the worst points of remote work. Almost one fifth of designers reported loneliness as an issue.

In an average week, almost 40% of designers said they were working between 31-40 hours. However, just over a quarter reported a working week of between 41-50 hours. Around 10% said they worked over 50 hours.

Freelance rates and the importance of social media

Most freelancers found their last opportunity through in-person contact (36%) or direct emailing (21%). Social media is a growing part of working life however. Around 7% of freelancers had been contact on LinkedIn or Instagram. A further 7% were contacted through their website portfolios.

You can view more survey highlights in Dribbble’s trend report.