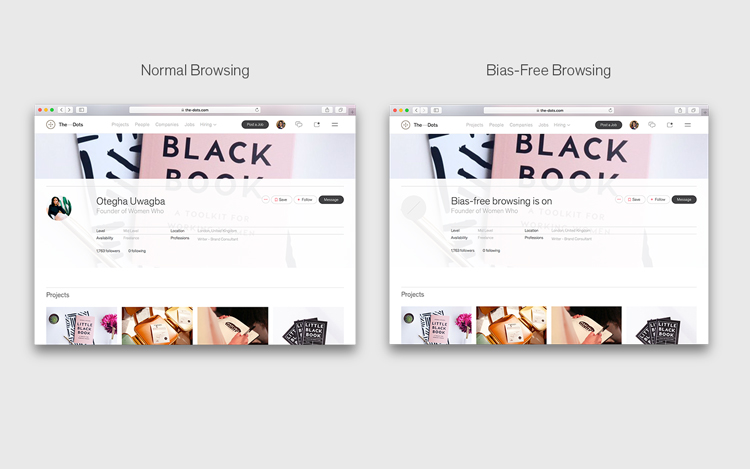 Regardless of our gender, race, religion, cultural beliefs or education, all of us are biased in some way. This no doubt seeps into recruitment – whether we are subconsciously looking for people we relate to, or we are actively going against this to try to diversify the workplace, personal feelings and opinion are making their way into the hiring process.

Positive discrimination – giving an advantage to those from minority backgrounds or discriminated groups to put them on a level playing field with others – can only be a good thing. It increases the diversity of people, and therefore the diversity of ideas, in the workplace.

But there is a dark-side to unconscious bias. Anything from a person’s photo to their name and university can discourage an employer from giving someone an interview. They may be technically capable for the job, but are not given a fair chance.

A fifth of designers are women

Research shows that the design industry is no better than many others for the “old boys’ club” mentality. Recent figures from the Design Council show that the design workforce is only a fifth female, despite two-thirds of those studying creative subjects at university being women, while only one in eight of design business owners are from a Black, Asian and minority ethnic (BAME) background.

The only way to truly remove unfair bias in recruitment is to take away those discriminating factors – age, race, ethnicity, gender, what university someone went it and even what someone looks like could all, consciously or not, put an employer off.

Creative networking platform and jobs website The Dots has done exactly this, by installing a new “bias blocker” feature on people’s profiles.

The Dots works by companies and individuals which are looking to recruit signing up to the platform, in a similar way they would with LinkedIn. They can then access the profiles of potential employees and scout for people they would like to interview for roles.

Blocks out names, photos and experience

The blocker, which is currently optional for employers, greys out discriminating features from people’s profiles, such as their name, photo, educational background and even their employment history. For instance, the clients a designer has worked for and their portfolio of work will still be shown, but the design studios they have been employed at will not.

The option to turn on the blocker appears in a hiring manager’s account settings, or when they search for “bias blocker” in the toolbar.

Pip Jamieson, founder at The Dots, came up with the idea for a tool when a recruiter from a member business, advertising agency AKQA, shared a video of how he used the website; he had physically been placing post-it notes over people’s profile photos and names when scouting.

Employment based on “quality of work” only 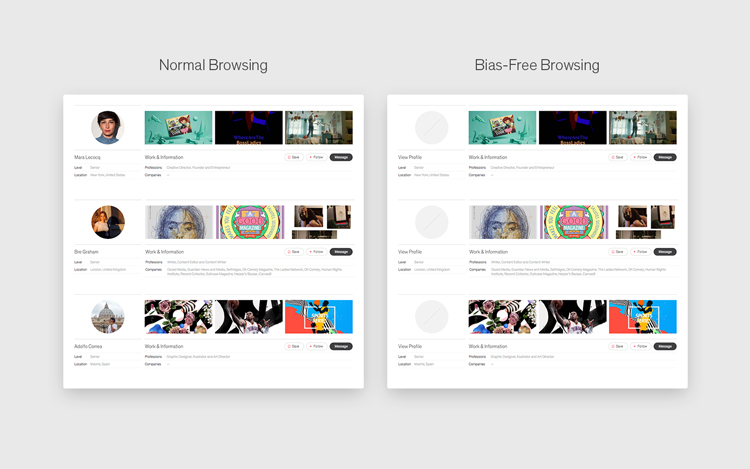 “The feature allows companies to search The Dots but removes identifiable things, making it all about the projects they’ve created,” says Jamieson. “So, employers are making a decision based on the quality of work.”

It could be argued that someone who has not been subject to unconscious bias in the past could have landed themselves a more impressive portfolio with bigger clients, purely based on the fact that they have been awarded more opportunities than others.

Jamieson says that this tool is a “first step” and will at least dispel the belief that if someone has worked at a large, successful design consultancy, their work is instantly better.

“Employers still need to judge someone’s portfolio of work,” she says. “And in the end, any creative director worth their weight in gold can spot good work, whether that’s for a huge brand like McDonald’s, or a start-up like Gal-dem.” 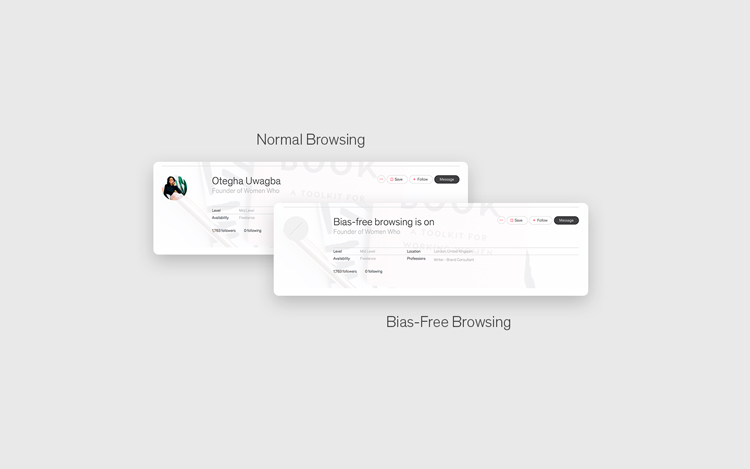 The Dots’ bias-free browsing mode is currently optional, but Jamieson is considering making the mode a compulsory default for all businesses using the platform in the future.

“The companies that come to us are the ones that are serious about building diverse teams,” she says. “If [the bias blocker] causes backlash for some clients, they’re not the kind of businesses we’d like to work with anyway.”

She adds that companies cannot rely on technology alone to be unbiased; after picking people for interview based on their work and talent, diversity quotas should be applied in the hiring process, she says, to ensure those from minorities and discriminated groups are given a certain level of preference in order to correct the existing imbalance.

“Unconscious bias is not a good or a bad thing, it’s just a reality of what we all have,” she adds. “Research has shown that diversity is better for business and innovation, and it’s important to build teams that are reflective of society on a whole. Once you do that, you naturally start removing unconscious bias.”

“If the UX is bad, you’ve failed”: Tom Williams on how to design an online video player