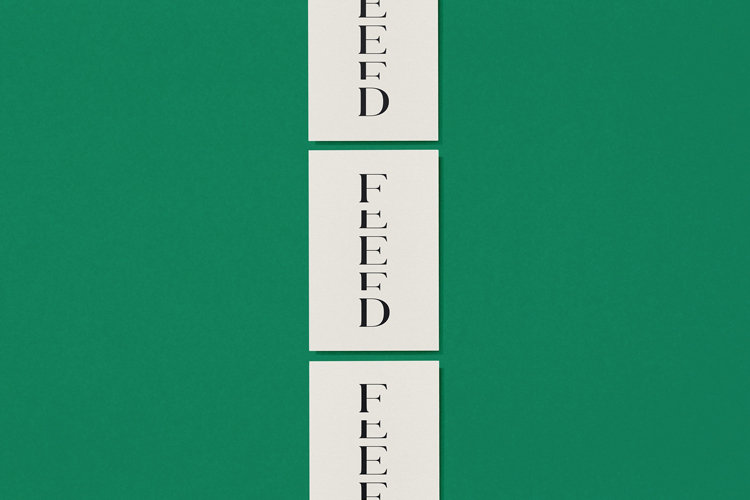 London-based design studio DutchScot has created a typographic identity for social media and content creation agency Feed. “Their spirit is young and vibrant but it’s backed up by expertise,” studio partner Alex Swatridge tells Design Week. The logo is a “living, breathing representation of the word ‘Feed’” and is constantly moving vertically online. It aims to reflect how people scroll through feeds on their phones, tablets and computers. There are more nods to the company’s social media-focus throughout. Rolling over an image will reveal an emoji relevant to that particular field, and if you leave the website open, it’s eventually taken over by a crowd of the icons.

Set up in the wake of a turbulent year, Generator Z is an American initiative that will provide 1000 students in Michigan and New York $1000 to develop an idea for an afterschool activity over the next year. Based in Brooklyn, US, studio Hyperakt designed the identity and web app for the “idea labs” in collaboration with its target teen audience. “The project has a playful approach that leaves room for messiness and mistakes,” the studio tells Design Week, which also incorporated a “nostalgic feeling” into the identity. The logo is generative and customisable, allowing people to fill in their own Zs. Good Type Foundry’s adieu has been chosen as a typeface for its “funkiness” while the colour palette was inspired by the early Internet and content creation (such as a Microsoft Paint) according to Hyperakt. “We reflected on content creation for the web and how young people use things that weren’t necessarily built for them, like how we would hack MySpace as teens,” the studio adds. “Young people excel at making things for themselves using the tools available.” 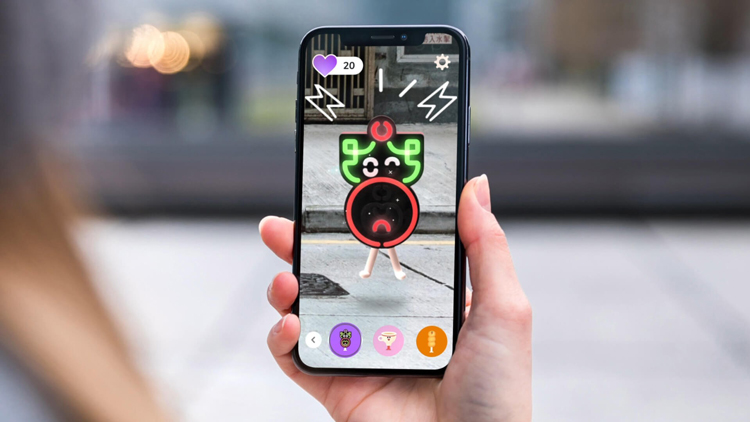 London design studio Sennep, animation studio Animade and Google Hong Kong have collaborated on an Augmented Reality (AR) app which aims to bring “joy and positivity to the citizens of Hong Kong”, Sennep says. The app introduces six Hong Kong-inspired characters for people to interact with as they explore the city. It plays out like a videogame, according to the studio, with cultural objects to be found and characters to be unlocked. There are surprise rewards and special offers too. “We loved the brief to spread smiles and positivity in Hong Kong,” Sennep creative director Matt Rice says. “Working with Animade’s delightful characters and imagining an interface that would complement their design and allow users to play with them, create scenes and share, was a real treat.” 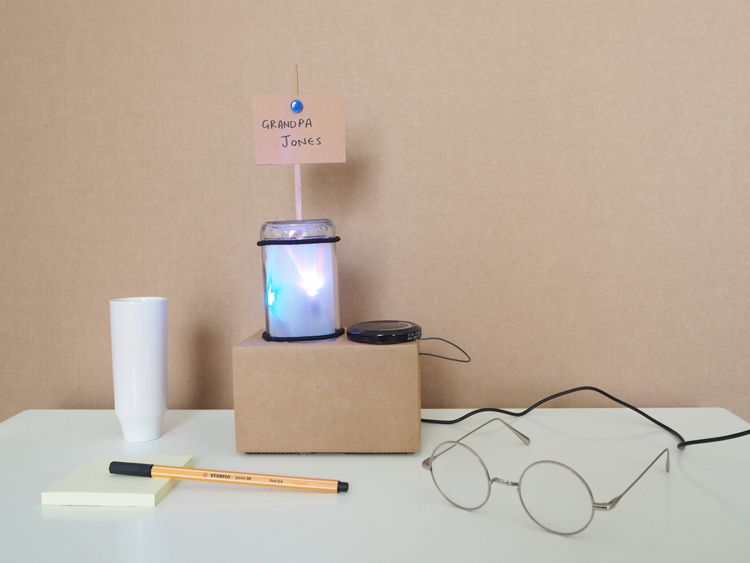 With support from the UK Covid 19 research fund, Interaction Research Studio – based at London’s Goldsmiths university – has created communications devices that aim to connect people separated from friends and family. The Internet-connected machines rely on simple connections, such as light and sound, and hope to provide an antidote to digital-fatigue from Zoom or videocalls. Light Touch comprises a pair of light-up devices which lets people send slowly fading coloured lights to each other. The studio’s co-director Bill Gaver has been using a pair with his 92-year-old mother who’s based in America. “When she sends me a light form California it feels like she’s right next to my desk in London,” he says. “It’s also really nice when I wake up or return home and find a light she’s sent me earlier, and she says she looks for a light from me particularly when she gets up at night.” Another device, Knock Knock, lets you send sounds between devices. 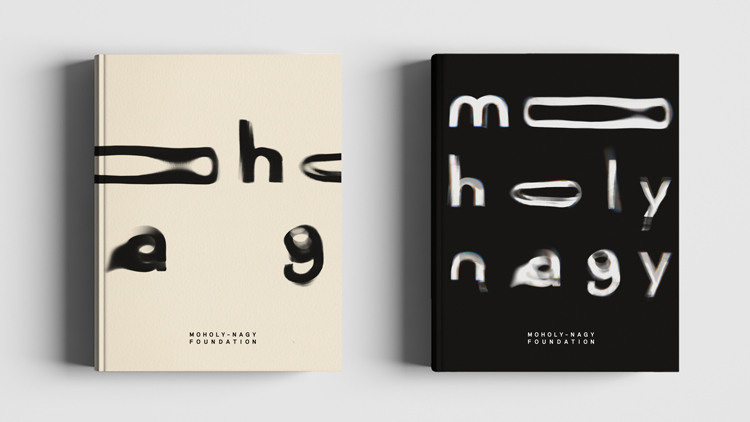 Moholy-Nagy was an artist, photographer and Bauhaus master who moved to London in the 1930s. After the war, he established the Chicago School of Design. He’s most well-known for his “photograms”, experimental photographs with light. An eponymous foundation has been set up by his daughter to promote and preserve his legacy. Pentagram’s Marina Willer has created the identity, designing a series of typographic forms which were made by hand in the studio with projections using light and water. These shadow-like letterforms make up the basis of the “fluid identity”, the studio says. The identity rolls out across materials like tote bags and a magazine as well as on the foundation’s website. 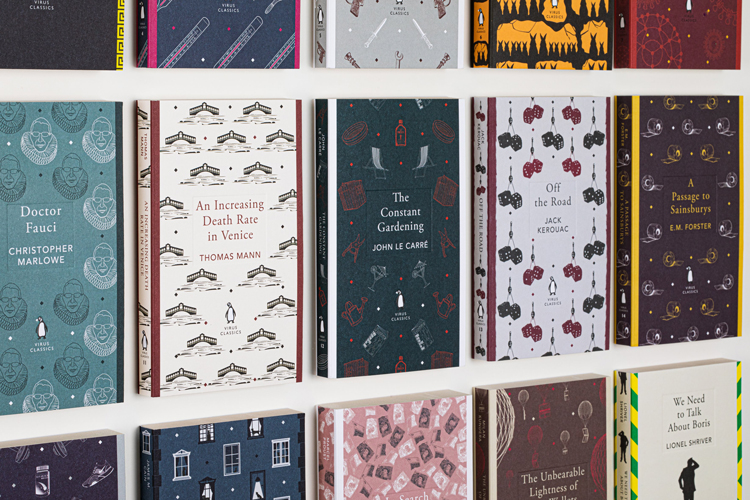 Artist Jolyon Fenwick has designed a conceptual series of very 2020 book covers. Virus Classics are a take on the Penguin English Library range but have a Covid twist. Among the spoof collection is Covid’s Metamorphoses, Thomas Hardy’s At Least 2 Metres from the Madding Crowd and Samuel Beckett’s Waiting for Ocado. While the world might be sick of virus-related news, the project is “designed to bring a light and lively spin on our current circumstances” according to Fenwick. 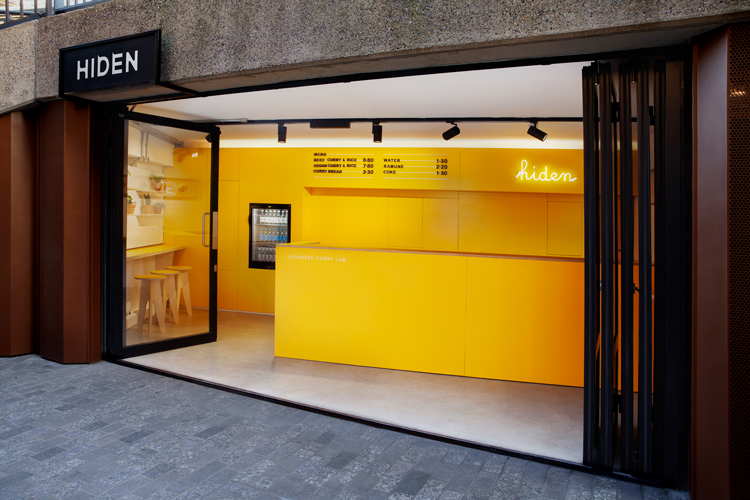 London-based studio Takagicaperan’s design for recently-opened Japanese curry restaurant Hiden is inspired by the signature dish’s main colour: yellow. The seats, kitchen area and bar area are all the same shade. “The simplistic yet crafted application of yellow colour throughout the space is integrating all functional aspects of the preparation process,” the studio says. “This celebrates the passion of food and the staging of the product.” The restaurant, which opened in Coal Drops Yard in London’s Kings Cross, takes its name from the Japanese word Hiden which means a secret recipe of an unknown blend of spices.