Protest group Art the Arms Fair will auction off works from over 70 designers and artists on Friday. The event, held at Peckham’s AMP Studio, is part of the group’s demonstration against the biennial Defence & Security Equipment International (DSEI) arms fair currently being held in London’s Docklands.

Lots at the auction range will range from an Uzi sub-machinegun made of Lego by Ben Lloyd and a printed “Estrogen Bomb” poster by Guerrilla Girls, to works from Shepard Fairey and a signed print from Ralph Steadman.

Among the work being exhibited and sold by Fairey is his “Peace Guard II” screenprint from 2016, which is understood to be turning the idea of striving for peace into a stance of militant vigilance. 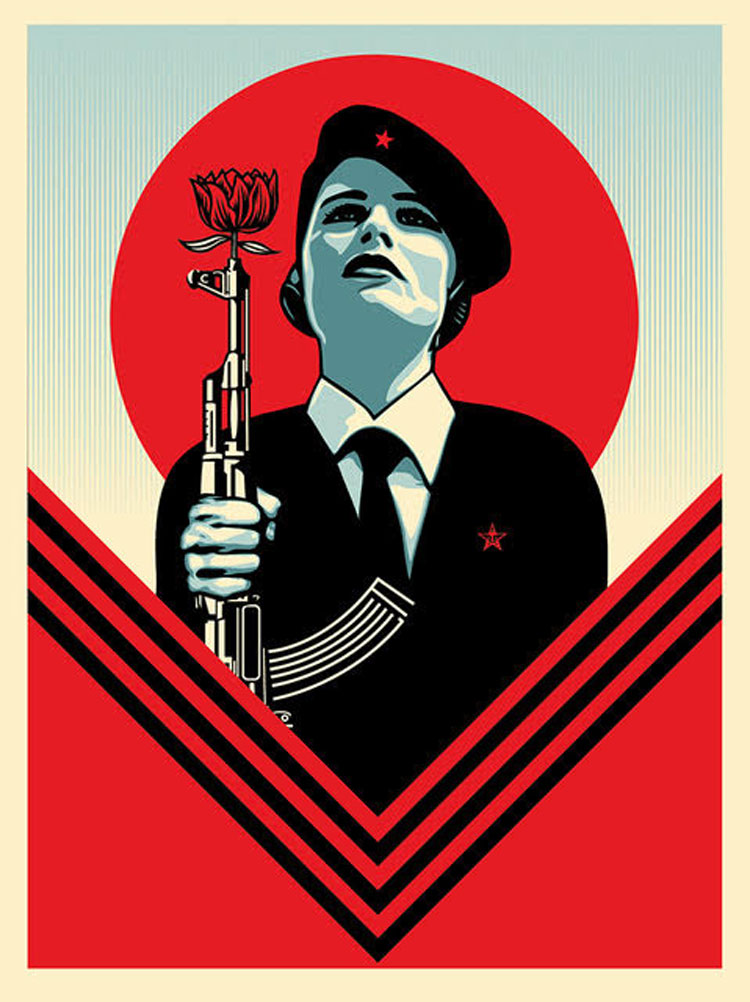 Peace Guard II by Shepard FaireyThe organisation expects arms dealers and military personnel from 68 countries, many of which are currently involved in war or human rights disputes, to attend this year’s arms fair.

“Through art and design, we’re offering a chance to explore the arms trade, and make visible its devastating impacts around the world,” says co-organiser Emily Graham. “[We’re challenging] it with something powerful and provocative.”

Friday’s auction will include work from Yemeni graphic designer Ahmed Jahaf. He currently lives and works in the capital city of Sana’a and uses his designs to draw attention to the conflict around him.

“I decided to leave commercial designs such as logos and motion graphics and started to design what was happening around me,” he says. “I made designs against the war because I wanted to show the world what’s happening in Yemen. This is my way to protest.”

This year’s exhibition and auction marks the second event put on by the group. The first, back in 2017, earned the Art the Arms Fair group a Nesta & Observer’s New Radicals award. It raised over £210,000 and featured an original work from Banksy.

The Art the Arms Fair auction takes place at AMP Studios, Peckham SE15 1NL on Friday 13 September at 7pm. All proceeds go to Campaign Against the Arms Trade.