A new exhibition is showcasing the work of illustrator Nick Maland, exploring his career in children’s books which spans more than 20 years.

It is centred around the launch of Mr Tiger, Betsy and the Blue Moon, written by Sally Gardner and illustrated by Maland. The new children’s book is set on a magical island and follows the adventures of a little girl and a cast of fairytale characters such as a talking tiger, a troupe of acrobats and a mermaid.

The illustrator has been working on the book, and its sequel, for the past year. The book is printed in the typeface Dyslexie, which aims to make reading easier for people with dyslexia.

The solo exhibition, which includes more than 150 pieces from a range of books Maland has illustrated, features artworks in ink and watercolour paint, and digitally-coloured images.

It has been curated and designed by Maland’s daughter Eloise Maltby Maland, who helped the illustrator decide what to include from his archives, alongside Bonnie Gibbons, gallery assistant at brand consultancy Circus, where the exhibition is on show.

Despite now being widely acknowledged for his work, Maland says if someone had told him during his teenage years that he would one day be an illustrator, he “would have laughed”.

He did not go to art school, instead choosing to study English and drama at university, with ambitions to head into the world of theatre.

He developed his artistic talent by mimicking the style of illustrators that he admired, such as Edward Gorey, Ralph Steadman and Mervyn Peake, having always collected illustrated books.

He was working in fringe theatre when he was encouraged by a friend to create a portfolio which led to him getting work as an illustrator — but Maland says his theatrical background has served him well. 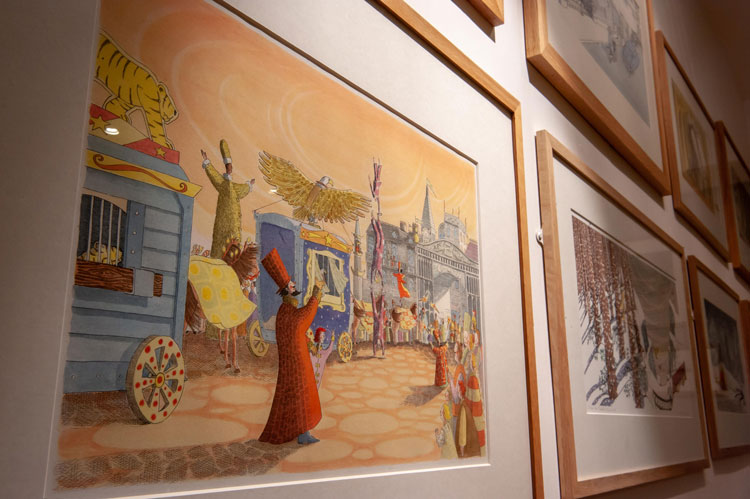 “The idea of theatre and drama is really important in illustration,” he says, as illustrating a children’s book “is like creating a stage for their imagination”.

Using images to bring “drama” to a book and ensuring one page flows after another like scenes in a play are a few ways in which he feels theatrical techniques and illustration cross over.

There were learning curves throughout, he says, such as when he showed his work to a picture editor at The Times, David Driver, many years ago.

“He took one of my pictures out of my portfolio, put it on the floor and said: ‘imagine that in a newspaper’.”

The editor advised him that if someone could not see what the illustration was about while standing and looking at it from a distance, it would not work. It needed to be “more dramatic and simpler” to “attract attention to the article and make the page look good”, Maland says. 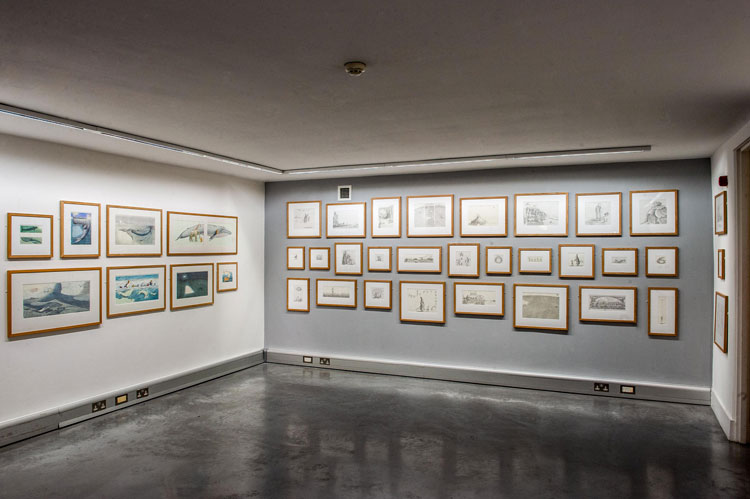 He made the switch to children’s books shortly after his daughter was born, as the longer deadlines in illustrating children’s books were better suited to life with a young family, he says.

Speaking about the exhibition, Maland’s personal highlights include illustrations from the Big Blue Whale book by Nicola Davies, which is one of the first children’s books he ever worked on.

Recalling how he first drew the whale for the factual children’s book, he says: “I remember taking [my daughter] Eloise up to the Natural History Museum in a buggy and sketching the big blue whale there.” 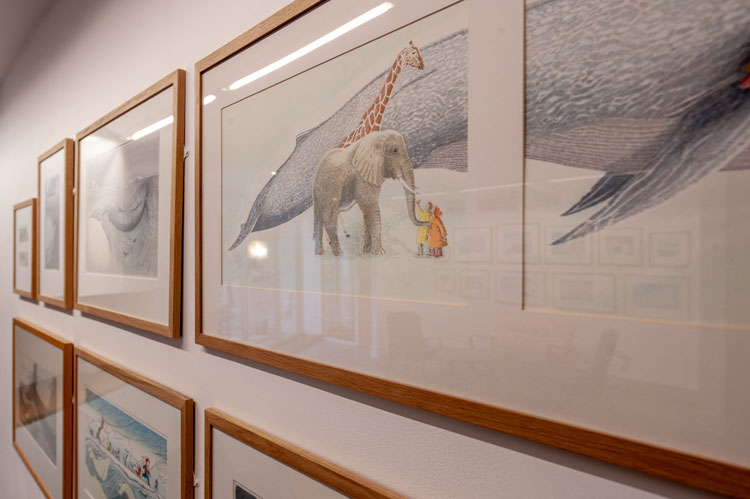 But when he sent in his image, he says he was told by Davies that the whale model was “not perfectly accurate” to what blue whales look like in real life, and he had to go back to the drawing board, to make it “sleeker”.

Other illustrations close to his heart include images from You’ve Got Dragons by Kathryn Cave, which led to him winning the Victoria and Albert (V&A) Illustration Award in 2003, which is also when he last exhibited his work.

Putting the show together, he found themes emerged in his work including underwater and moonlit imagery. “Night-time, flying, whales and undersea worlds do tend to dominate,” he says.

Maland believes the key to a successful illustrated book is creating visually strong characters that are “interesting” to children.

“A character doesn’t have to be cute,” he says. “It just has to grab the imagination.

“Whether it is Quentin Blake or Maurice Sendak, they [know how] to do that. The illustrator is there to illuminate the writing.”

He offers the example of Mr Tiger, from the new book, who is a central character in the exhibition.

“He has a long, tiger-striped overcoat which he always wears, pointy, long, white shoes and a top hat and bow tie. He has a slightly Edwardian and old-fashioned feel, which, to me, makes him a rather appealing character.”

“He could have just been a cute looking tiger, but in the story, he has this menace to him as well, so there had to be a balance.

“He is a person of mystery, you have no idea where he comes from or where he goes,” he says.

When illustrating a book, his process involves drawing lots of “very small sketches of characters in situations in the book” to start with, and then developing them with greater detail.

He used to mainly work with watercolour paints but now he does most of his drawings on paper before scanning them and colouring them in digitally. A lot of publishers prefer this, he says, as it allows for colour edits to be made more easily.

Maland feels there are techniques that can be applied to illustrating for both children’s books and newspapers. “You have to understand the important ideas in the text and find a dramatic, interesting way to portray them,” he says. Over 20 years’ experience has helped to show him that finding a simple and effective way to convey a message is important in any kind of illustration — whether it’s aimed at children or adults.

Sebastian Conran: “Design is not making something that looks pretty”