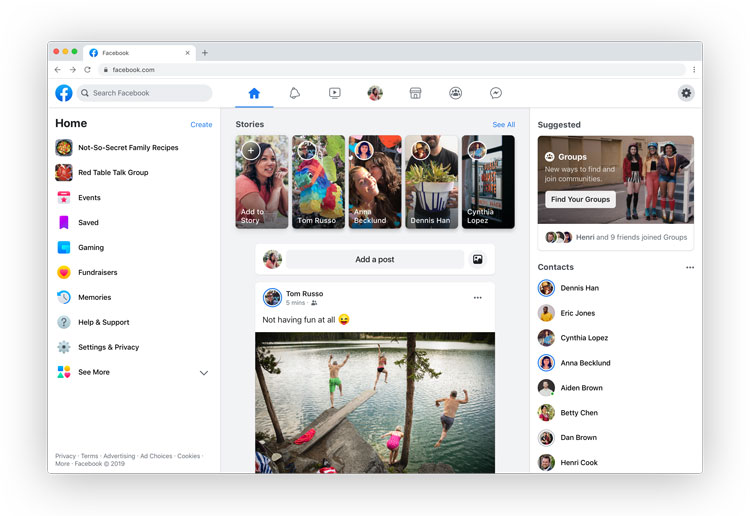 Facebook has revealed a redesign of its website and mobile app, as well as tweaked its blue brand colour and logo, to create an online space where people can “express themselves freely and connect with communities”.

The new designs come alongside other Facebook-related updates, including changes to Facebook-owned apps Instagram and Whatsapp, such as an improved camera function and fundraising options on Instagram, and new tools for businesses on Whatsapp.

The social media giant has also launched more advanced augmented and virtual reality (AR and VR) services, as well as two new VR headsets, one of which — Oculus Quest — is an “all-in-one” gaming set that can be used without a computer.

The desktop version of the Facebook homepage has been cleaned up, ditching its signature blue bar at the top, and now has more white space. 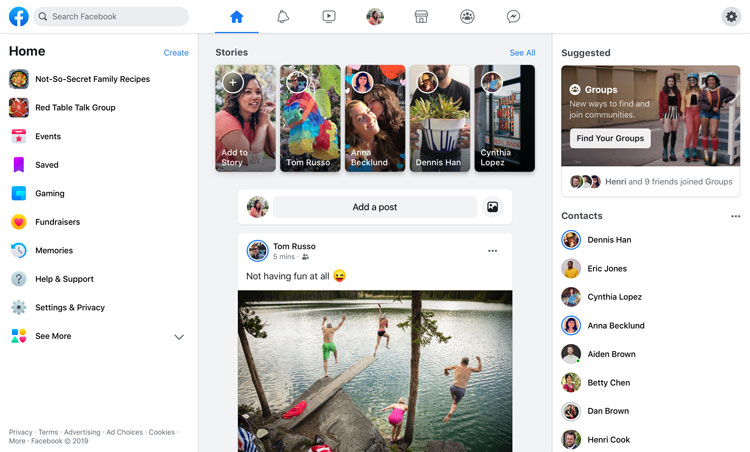 The signature blue colour has been refreshed, made lighter and brighter, and both the full logo and shorthand “F” icon have been redrawn. The “F” appears chunkier than before and is set within a roundel rather than a square, while the blue and white colours of the icon have been inverted.

Icons across menus have been redrawn with brighter colours, flatter graphics, and in the case of the top navigation, simplified as line drawings.

The new homepage design centres around “communities”, says Facebook, with greater emphasis placed on finding and joining relevant groups. Facebook groups are vast, from support groups for those living with health conditions to forums for hobby enthusiasts.

“Groups” is now a more prominent menu option, featuring on the top navigation, alongside other main elements such as “notifications” and “messages”.

A new search bar also appears on the right-hand side of the homepage, encouraging users to search through their existing groups or discover new ones.

Various features have been implemented for different types of group, such as the ability to post anonymously on health support ones, and a job vacancy template for employers using job groups. Gaming groups now have a chat feature, where members can create conversation threads for different topics, like a fan forum.

Facebook has also introduced an entirely new feature called Meet New Friends, which will appear at the top of users’ newsfeeds, and will be an opt-in capability that allows users to “start friendships with new people from… their school, workplace or city”, says the social media company.

In a selection of countries, which does not include the US and UK, Facebook runs a dating service, and the company has now updated this. This includes a new function called Secret Crush, which lets users say if they are attracted to a Facebook friend. The other person will only get a notification if they have also opted into Facebook Dating.

Facebook Messenger has been updated, and users can now share videos directly from the Facebook app into Messenger. A specific desktop app for Messenger is launching, whereas previously the app could only be used via a phone or tablet. It will also prioritise messages from users’ closest friends and family, to help people “find the content from the people they care about the most”.

The overall aim of the overhaul is to create a “simpler, faster and more immersive” look and feel for Facebook, which celebrates users’ “interests and passions” by giving them more personalised spaces.

“We’re building a more privacy-focused social platform, which gives people spaces to express themselves freely and feel connected to the people and communities that matter most,” the platform says, on behalf of its CEO, Mark Zuckerberg.

Facebook has been embroiled in several data and privacy scandals in the past few years and has been subject to criticism for its ability to spread potentially dangerous and toxic content.

This includes the infamous Cambridge Analytica data-sharing scandal, with allegations around users’ personal information being used to target certain demographics for political means, as well as this year’s terrorist attack on two mosques in Christchurch, New Zealand, where footage was live-streamed on Facebook and viewed 4,000 times before the platform took it down.

The design changes have started rolling out across desktop and app versions globally, and will continue to do so over coming months.

What can designers do to help tackle the climate change crisis?