The poster presents the themes and characters of the film as a fantastical scene and Muggeridge has applied the title in American Text.

At first both the illustration and title lettering appear at odds with the gritty realism of the movie.

The film tells the story of Laila, a girl on the run from her family, seeking refuge in West Yorkshire with her drifter boyfriend Aaron.  The pair are imperiled when her brother arrives in town with a gang of bounty hunters.

Catch Me Daddy is the directorial debut from brothers Daniel and Matthew Wolfe and opens in UK cinemas on 27 February.

The directors suggested working with Pan, according to Muggeridge who says together the illustration and the lettering “are aggressive, beautiful and full-on – like the film”.

You can glimpse an inverted version of Pan’s image through the letterforms, which heightens these contrasts.

Muggeridge has not worked on a film poster before and says he doesn’t “think within the expected film poster vernacular” which has helped him take a fresh approach.

He says he has looked to push the design but “work within the constraints of what a film poster needs to be” – which means reconciling all the design elements such as review pull quotes, film festival accolades and cast listing.

The film has already previewed at the 2014 BFI London Film Festival and Cannes 2014, for which Muggeridge designed a teaser poster and a book.

He’s also repurposed the Lacoste crocodile – another film theme – and created these badges. 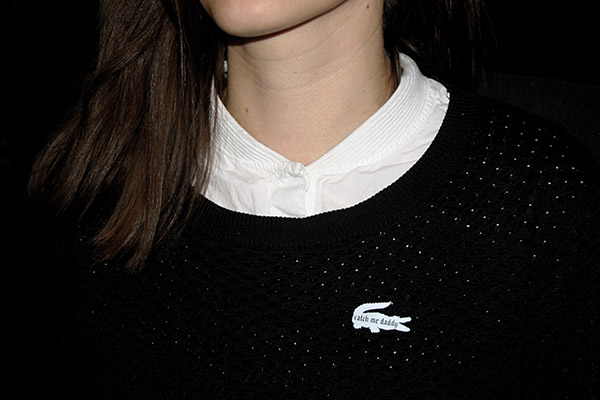