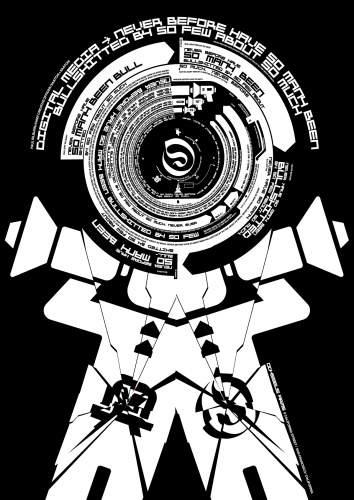 The Designers Republic’s Ian Anderson has designed a poster for Odysseus Arms, as part of an ongoing series of 50 remade and remodelled works from TDRTM’s history.

Digital Media: Never Before Have So Many Been Bullshitted by So Few About So Much is named after a quote from Saatchi London’s co-chief commercial officer, Paul Silburn.

The poster is a re-engineering of the team’s vintage Freehand software files, and explores the self-inflicted effects of information overload on the individual.

The image looks at themes within the modern digital world, including “the current digital media rebate mess, massive amounts of ad fraud, massive amounts of misinformation and the guru culture where just a few ‘insiders’ claim to know everything,” according to Odysseus Arms co-founder, Frank Tipton.