There are thousands of typefaces available off the peg, so what’s the point of creating a custom font? You might think bespoke type has become obsolete – but far from it. ‘Custom font brings a visually distinctive tone of voice to every aspect of written communication within an organisation,’ says Phil Garnham, type design director at Fontsmith. ‘When it’s used in a consistent graphic language it becomes a very powerful and valuable asset providing a strength of synergy throughout the brand.’

Mark Bonner, co-creative director of GBH, says it’s often the designer persuading the client to go for a custom font, but that it’s a very effective tool to create a unique handwriting. ‘It’s not the most expensive element to commission, if you consider the consistency of look and feel you can get for your money,’ he says.

Working on the original identity for Virgin Galactic, GBH created a font with a ‘slightly retro quality to it’, with inspiration coming from America’s Apollo moon missions. With type specialist Dalton Maag, GBH designed a square font – it needed to be stackable vertically as well as horizontally – in five different weights, named from Four G down to Zero G in homage to the spacecraft’s different acceleration forces. For lighting manufacturer Flos’s new Cubo wireless lighting control device, GBH created a square font with slightly curved elements to reflect the product’s shape.

Fontsmith, meanwhile, has created a new Champions League font with Radiant Studios, having been tasked with delivering a robust type that injected energy into the brand while retaining the prestige of the competition. Fontsmith developed mood boards from Radiant’s initial imagery to find an appropriate type form. ‘We then took inspiration in the high contrasting features of the logo and star elements, and applied a moderate level of contrast and spikiness to the whole alphabet,’ says Garnham. ‘By doing this we managed to get the feel and tone of voice right, and injected some vitality by drawing elegant rounded bowls on the lower-case a, b, d, p and q.’

One reason for commissioning a bespoke typeface is logistics, as it offers a sure-fire – and often cheaper – solution to licensing concerns, says Dalton Maag’s Bruno Maag. The client also has complete control of the technical issues of installing a font. Exclusivity is also important, and whereas imagery and other design elements might vary from culture to culture, typography is largely neutral. So commissioning an entire font family with different alphabets, from Latin to Cyrillic, is increasingly important to global brands.

Maag worked with Greenspace on a font for the rebranding of Toyota, which was keen to achieve a more designed feel. ‘The font reflects the values of precision and quality, yet with a certain flair,’ he says. The project required display and complementary text fonts, but not all custom-made alphabets include a more practical text font version – or what SVI Design founder Sasha Vidakovic calls a ‘blue-collar font’.

NB Studio’s identity for Land Securities’ mixed-use venture Park House on London’s Oxford Street included a display font to tie the different functions of the development together. Reflecting the architectural ribs of the building as well as some of the artwork to be displayed, the Park House font will be used on everything from marketing print to hoardings and online.

A bespoke typeface can also be used to revamp an existing identity, as was the case with SVI’s work for Serbian pharmaceutical company Ivancic &amp; Sinovi. The consultancy wasn’t allowed to change the core elements of the original identity, such as the logo and colour. The solution was a new typeface used boldly on the packaging, combined with a different graphic pattern for each product. ‘That’s now becoming so strong that consumers hardly notice the logo and they relate to the brand through these elements,’ says Vidakovic.

Although it’s mostly large corporations that are drawn to custom type as a way of making a subliminal difference to their communications, the range of projects varies widely.

Studio 8 Design co-owner Matt Willey put together a custom font for website Blazingword.com by Dan Crowe. Launching later this year, Blazingword will be an ambitious literary website aiming to become the ‘You Tube for words’, and Willey, who is personally involved in the project, was keen to create an ownable typeface that would work online as well as on potential future print projects. He based B-Word type on an old Olivetti typewriter sample. ‘I liked it because it was very simple and yet felt quite modern,’ says Willey.

Not-for-profit arts organisation Measure commissioned Fontsmith for a typeface for British artist Conrad Shawcross. FS Conrad was designed as a response to his artwork Chord, which uses two identical rope machines that move away from each other while weaving a thick rope from spools of coloured string.

‘This project really forced me to re-evaluate how I think about creating letter shapes,’ says Garnham. ‘I had to develop a new approach to understanding how to extract letterforms from a different kind of brief, as I had no real design context to work to.’ Inspired by the Chord machine’s apexes, overlaps and twisted threads, FS Conrad is a display typeface composed of fine parallel lines that overlap to create a multilayered texture within words.

‘It allowed a huge amount of freedom in expression, irrespective of size and usage,’ adds Garnham. ‘This was type for art’s sake.’ 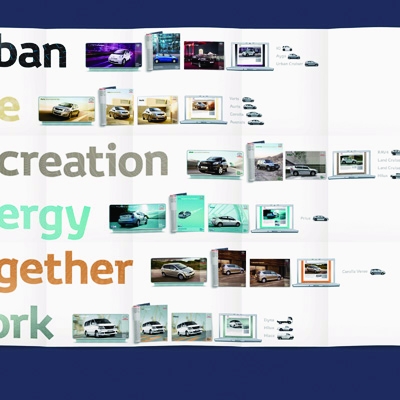