Expo 2020 was due to open at Dubai in the United Arab Emirates (UAE) in October last year but has been postponed until October 2021 and is set to run until March 2022. 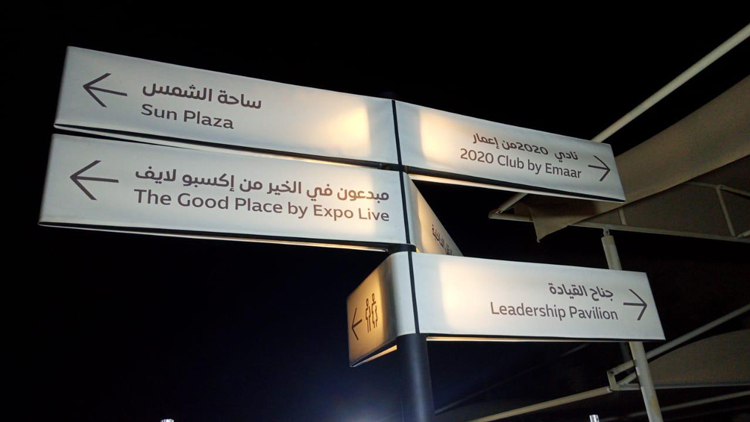 It’s the first time that the world exposition has been postponed. It will showcase pavilions from over 190 countries including the UK entry, a “choral landscape”, by Es Devlin. The original name has been retained for branding.

Spaceagency started work on the project in 2014, according to studio director Sarah Manning, and the design has evolved several times over this period. 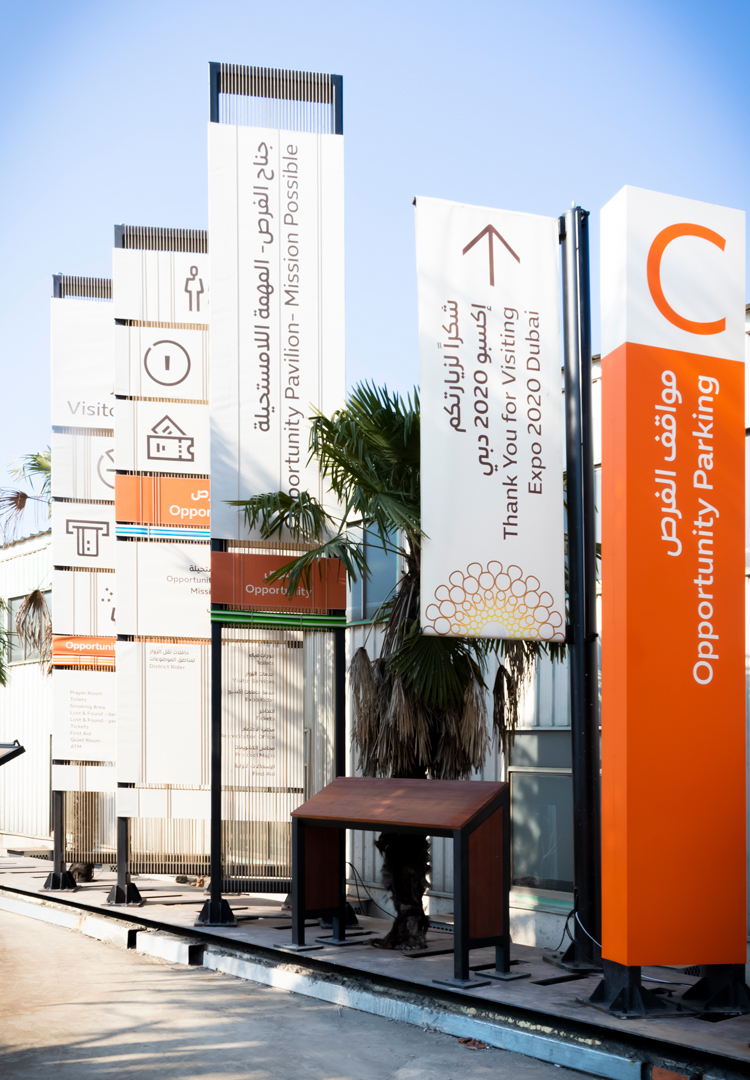 The organisers wanted to “weave the cultural heritage” into the design to avoid a generic feel, Manning says. It’s the first time that the UAE has held a world Expo which provided an extra pressure and sense of opportunity for Dubai, she adds. Last year, the UAE revealed a new logo as part of a wider nation brand.

“People know a lot about Dubai,” Manning says, “but they don’t know as much about the people and culture.” A research phase followed where the studio explored local traditions and techniques. “Each aspect of the design had to be a blending of local heritage with international ideals,” the designer adds.

The design team discovered a weaving technique called Al Sadu, a Bedouin tradition that exists in several of the UAE’s regions. Each area has its own colours based on local pigments, Manning explains, as well as regional symbols that can be woven into patterns.

These work as a king of branding. “You would weave your family or clan’s brand or symbols into your Sadu, which would go on your saddles or tents, and that would mark your territory,” Manning says.

Spaceagency worked with Al Ghadeer UAE Crafts, a foundation was set up to provide income and support for the women weavers of the Sadu tradition who tend to be older and live in rural communities.

The craft is also UNESCO-protected: many young women are not making up the craft as the explore opportunities, prompted by the advent of oil and widespread social transformation.

The wayfinding blends text-based fabric with the Sadu tradition, Manning explains. Rope has been strung vertically along rectangular steel frames which act as a loom for the Sadu.

The Sadu then provides a “colour-coded identity” for the different zones, Manning says, and each zone also has a different pattern. Off-white fabric, with information printed on in a bespoke typeface, has then been woven through the designs. 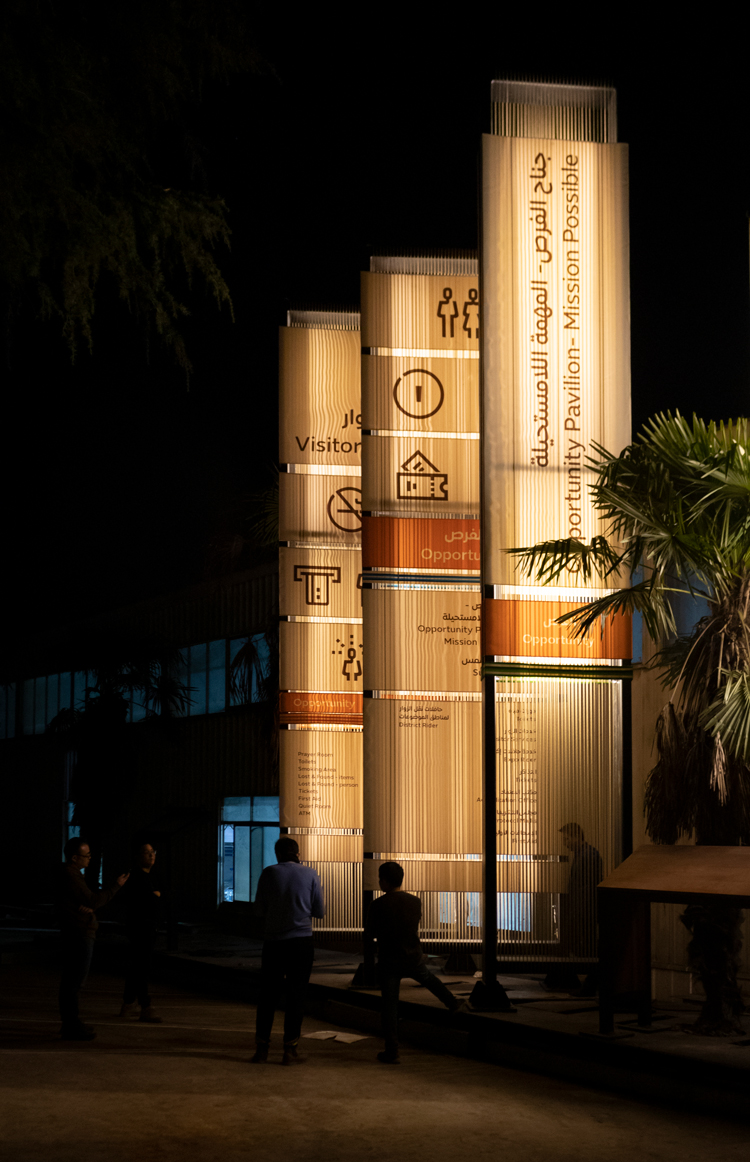 The design is modular, which was necessary at a time of worldwide uncertainty. The pandemic has affected the line-up: different countries were in different locations at the exhibition a year ago, according to Manning.

“It needed to be easily interchangeable,” she says. “What if you put the signage up, but it turns out the German pavilion is no longer here.”

The studio was keen to keep it “festive” as well as practical though. The fabric can be easily taken off, printed and replaced, Manning explains. Any new fabric can then be woven in and clamped at the edge, she adds.

Supporting signage has been printed on ribbon-like fabric which have been wrapped around black steel frames.

The signs are backlit, meaning that they have “two distinct personalities” at day and night. “From the very beginning, we liked the idea of a lantern,” Manning says, pointing to the sheer quality of the fabric.

The material is an ecru colour, as a nod to the desert settings while the printing is a dark brown to avoid a monochromatic colour palette. The design team aimed for “earthy tones”, Manning says.

The UAE’s weather conditions were another consideration: there are sandstorms, heavy dust and sand and rain. The fabric has an impermeable coating which aims to repel this combination. As well as testing different fabrics, the team has had mock-ups set up for the past year to see whether it could withstand the weather. 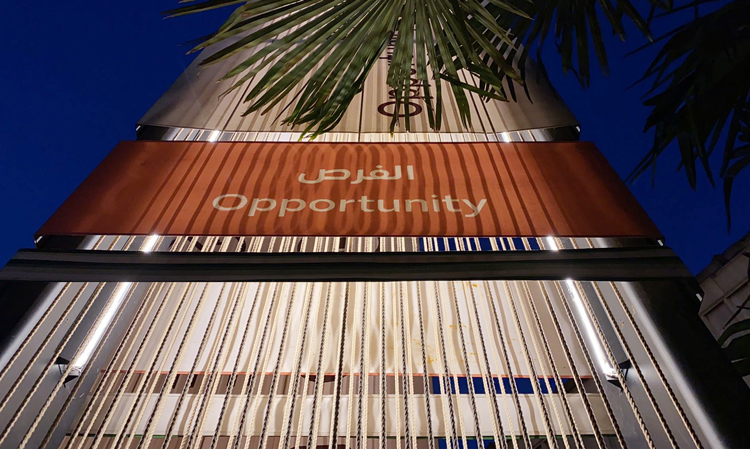 A set of pictograms has also been created in collaboration with Dubai-based design studio Tinkah. At a week-long workshop in London, the two studios developed concepts for the pictograms.

A calligraphic design was chosen, which aims to combine international symbols with Arabic letterforms. Pictograms are particularly important at an event like the World Expo which draws an international crowd (in non-pandemic times), according to Manning.

The pictograms are made up of pieces of the Arabic type that have been reassembled into recognisable shapes, she says. “It’s like a puzzle – taking glyphs of the Arabic and making it into a head of a person,” the designer adds. 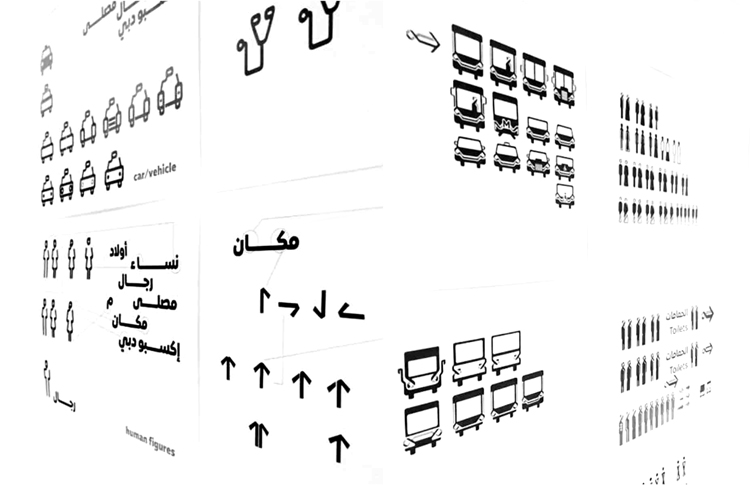 Cultural divides presented a challenge for the graphic design, Manning says. The sign for first aid, for example, highlighted differences. In Western countries, people might associate medical assistance with the cross but in the UAE, it’s usually represented by the red crescent.

As the expected visitors are split evenly between Arabic speakers and non-Arabic speakers, the crescent shape did not seem obvious enough, according to Manning – and it was especially important given current events. After considering an ambulance and first aid supply as options, the design team eventually used a stethoscope symbol.

The symbols for men and women was also challenging thanks to the different clothing styles in the Middle East. Traditional male clothes in the UAE resemble dress-like shapes, which could be confusing for a Western audience. The difference between the genders is expressed through the head area, where a scarf form can be seen for women.

Because the pictograms originated from an alphabet, some images could almost be read, according to feedback from Arabic speakers. Images that gave different connotations in this way were reconstructed throughout the design process, Manning adds.