“The waste from the events industry is despicable”, says Kaye Dunnings. “Shangri-La is trying to make people think about how we treat our environment, and how we can reuse as much as possible. We’re trying to get people to consume less.”

Dunnings is creative director at Shangri-La – one of 30 areas at Glastonbury Festival, which through its elaborate, upcycled art installations, underground music stages, and “craftivist” workshops, looks to encourage visitors to engage and participate politically and socially, as well as culturally.

Shangri-La ran for the 10th time this year and embodies everything that is underground and activist at the huge festival, while attempting to be inclusive of a diverse audience. Its main music stage, The Clash, showcases the underground music scene, from grime to reggae and jungle, while The Sistxrhood is a stage and “safe space” dedicated to women and non-binary musicians and artists.

Scum is the festival’s only heavy music stage, focusing on politically engaged metal, punk and rock, while the Truth Stage features the festival’s largest collection of artworks, as well as an eclectic selection of music, from rap to heavy metal to trance.

To encourage visitors to get involved and help them feel part of the festival’s cultural offering, there is The Disruption Bureau, a collaborative space where festival goers can make their own “subversive” protest art alongside artists and designers, from placards and protest banners through to cloth printing and mosaics – all of which are made from recycled materials.

Professional creatives have a space for themselves in Shangrilart – not given a physical area, the concept calls on artists and designers from across the world to create unique installations and art-pieces, ranging from audio soundscapes through to giant sculptures, which, in keeping with Shangri-La’s current environmental theme, have all been constructed from used goods.

So that visitors can take home a piece of the festival, Shangrilart also hosts a shop selling small prints of artists’ work, with all profits going back to contributing artists, rather than Glastonbury.

For the last four years, Dunnings and her creative team have translated the DIY, activist culture of Shangri-La into a progressive, liberal space that makes comments about the environment, diversity and current global political agendas.

Sustainability has been the core focus of the area for the past two years, under the mantra of “reuse, recycle, resist — don’t be a dick”, calling on organisers to upcycle and recycle as much as possible to create the area’s design, and calling on visitors to take care of the space they are inhabiting.

Dunnings is aware of how wasteful large-scale events can be, often requiring a huge amount of new materials, resources and energy to produce — so in retaliation to this, and in an act of eco-friendliness as well as protest, her team recycled and upcycled landfill to make this year’s set, turning old junk into elaborate art installations and stage sets.

In doing so, the creative team was also showing off the resourcefulness and creativity involved in transforming old, tattered things in ingenious ways.

Contributing artists were expected to come up with imaginative ways to turn waste into radical artworks, which both intrigued visitors and challenged them to question the state of the environment, and those in power’s attitudes towards the climate crisis.

Dunnings’ overarching creative brief for this year took a more satirical turn, not only looking at the here-and-now but thinking about the future of humanity and the “impending apocalypse” that could ensue if action isn’t taken.

This irony was realised through creating installations and sculptures out of objects that juxtaposed with what they were trying to represent – hundreds of bins, painted and turned into a seascape, for instance, or old telegraph poles made out of junk such as speakers, electronics and children’s toys, stacked up high and designed to look like trees, creating a “future forest” installation.

Another played on the debate around data use and public surveillance, and how this is increasingly encroaching on our personal lives. The digital wall of “blinking eyes” was created by stacking together hundreds of used mobile phones, which simultaneously played video clips that had been crowdsourced from members of the public. “E-waste is a big problem,” says Dunnings. “So instead, we’ve turned it into a beautiful installation that has meaning.”

One more intricate and elaborate example is Living Lungs, produced by Dan Rawlings — an amalgamation of used car parts such as engines and exhaust pipes, which have been welded together and reformed into a giant, lung sculpture, sending visitors a message around the impact of pollution on people’s health. To further communicate this, the structure was filled with living plants, which help to cleanse the air of carbon emissions through photosynthesis — both a practical addition to the festival and a symbol of the contrast between nature and man-made, polluting vehicles.

Even the stalls and shops are made from recycled rubbish — old shipping containers are used as housing units for shops and The Disruption Bureau’s craftivist workshops, where visitors can also make art out of recycled junk, from jewellery to flags.

“We’re trying to get away from building these big sets and using lots of raw materials,” says Dunnings. “A few things have to be new because of health and safety – you need structural integrity for certain things, but we then expect to use them for eight years or so.”

While transforming scrap into stage sets, art and practical spaces is inventive and reduces waste, it comes at a price — recycling and upcycling requires a lot of people-power, time and resources, and it can be challenging trying to ensure old items are compliant with health and safety regulations.

“Last year, we made a tower out of 30,000 plastic bottles, to reflect the sheer number of bottles that reach our oceans every minute,” says Dunnings. “We had to source all these old bottles from festivals, then it took a team of 20 of us a week to connect them all together into a scaffolding structure. It can be a logistical nightmare.

“We also have to make sure everything is flame-proofed,” she adds. “When you’re draping a sculpture in 10,000 kilograms of fabric, it can be hard. Often, materials for landfill are quite flammable.”

Another potential hurdle is stopping visitors from destroying all the design team’s hard work. “It can be really hard keeping things out of people’s reach,” she adds. “When people get here, and they’re wasted, they want to touch everything, and throw it around. We’ve had to think about where we place things, so that we limit how close people can get to things.”

One way to mitigate this and stop visitors misusing or damaging the art is to enable visitors to feel like they are part of the area’s artistic collective themselves — encouraging them to take part in craftivist and art-making workshops gives them a sense of ownership, and therefore an increased understanding of the art’s value. 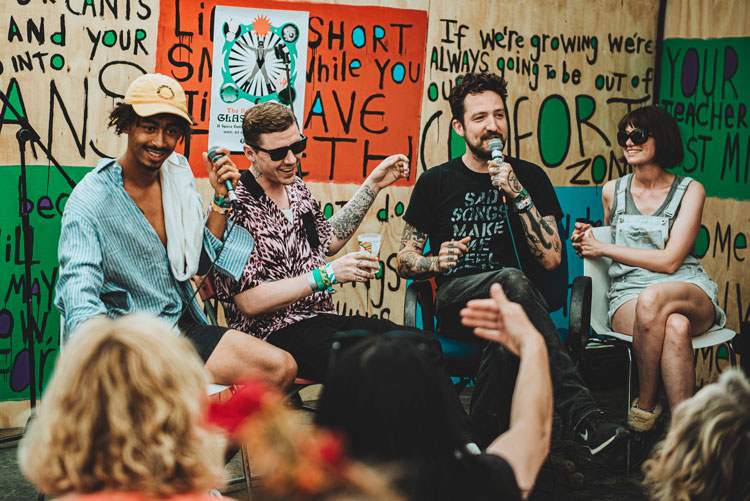 “If people make their own things, that helps them take care of the art more,” Dunnings says. “We also try to humanise objects for the same reason — putting eyes on something or giving it a name or personality helps to make it seem more alive and valuable.”

The ethos of wanting visitors to feel closer to the art is further explored through Shangrilart’s shop — the shipping container sold prints of works from different artists, with the hope of expanding to small products and sculptures in future. Money made goes straight back to individual artists.

“More people can own art now,” says Dunnings. “We’d like to encourage visitors to invest in art, not in fashion or other stuff. Rather than giving money to big corporates, their money goes directly to important voices helping to create diverse cultural landscapes.”

While Shangri-La’s creative team has tried to diversify its range of contributing artists and musicians year-on-year, and therefore appeal to a wider demographic of visitors, Dunnings admits that Glastonbury still has a way to go.

“You need to be able to afford to come to festivals,” she says. “Festivals are expensive and so are mostly accessible to those who are privileged, as is the art scene. But then, there’s also people who save up for a year to be able to go. We also get lots of volunteers, from stewards, builders and fork lift drivers, who come for free.”

And ultimately, through its ethos of freedom of expression, Shangri-La is trying to make itself accessible to as many people as possible by providing a space for different voices, and different styles of music and art.

“Festivals are such an important place for people to gather en masse and have a shared experience,” Dunnings says. “We’re trying to change our art and music contributors, and as a result our audience is changing — we’re seeing more artists of colour, more female artists and more transactivist groups. We want this to be a safe, communal space for everyone. Increasingly, we are trying to bring in a brilliant and beautiful community at Shangri-La.

“There’s still a long way to go, but because of the spaces we’ve created, like The Sistxrhood, people feel welcome here,” she adds. “The straightest, middle-aged men arrive at Shangri-La, then suddenly they’re wearing glittery hot pants. People feel like they can be really free here — we want to communicate that it’s for everyone.”

How to become a: studio marketing manager