An online platform has been launched which seeks to help creatives secure funding for “ground-breaking new projects”.

Alternative Thinkers highlights creatives from the fields of design, art, architecture and technology, among others. It aims to “upend the creative community’s traditional ways of working and to challenge the status quo for the better”. 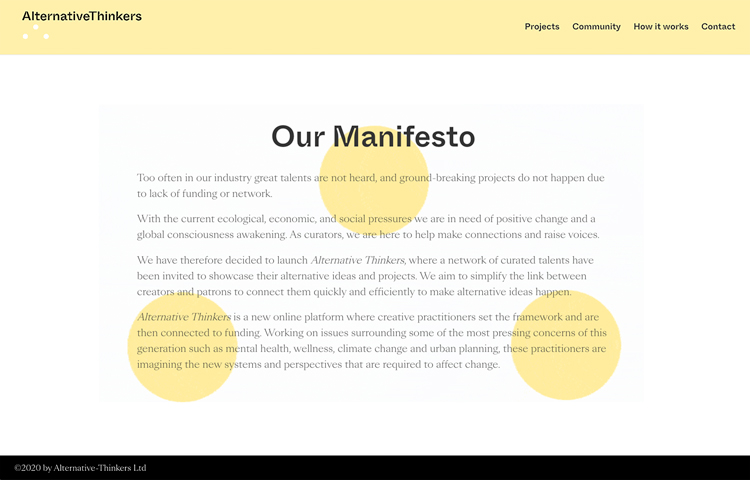 The clue to the types of projects featured is in the name; they aim to tackle “pressing issues of our time including climate change, sustainability, mental health, wellness and urban planning”. There are a few routes into supporting designers; through investment, collaboration or by providing spaces for them to showcase their work.

Seeking to protect the “integrity” of design work 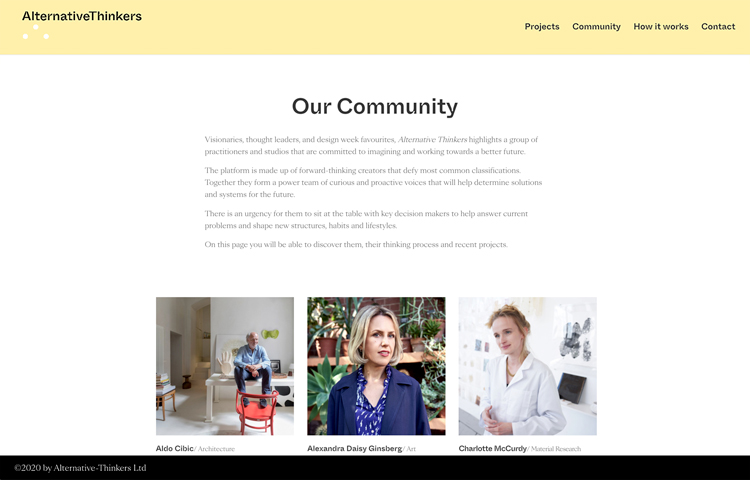 It has been set up Anne-Laure Pingreoun, founder of Alter-Projects, who says that it’s designed to “protect the integrity of the work and freedom of the practitioner”. It aims to achieve this by allowing designers to set the parameters and objectives”, which have “in the past been defined by the funder”. Pingreoun also notes that at an “unprecedented moment, there is an opportunity to radically alter the status quo”.

She adds: “As governments and traditional systems fail us, we need alternative thinkers to help generate a more inclusive and mindful future. It is time that designers are recognised as having as critical a role as decision makers, such as urban planners and governments, in shaping what our futures looks like.”

As the platform has only launched this week, it is too early to tell if it will achieve these goals. For the initial launch though, the community it’s gathered is diverse, with a focus on fields that have struggled to find mainstream footing in the past. Jane Withers, a London-based designer involved in the project, works in biomimicry and spoke to Design Week last year about nature’s place in design. While the movement is growing, it’s sometimes hampered by expensive research.

Projects can be submitted by this community of designers, and will then be curated by Pingreoun before they are listed on the website.

Which designers are involved?

Fernando Laposse, a material designer who was a finalist in last year’s Arts Foundation Futures Awards, is part of the platform. He works with “overlooked” materials like plant fibres and also seeks to understand how indigenous communities can be involved in the production process. Laposse’s Totomoxtle material is made from corn husk and can be used to make furniture and interior surfaces.

He says that he’s excited by the possibility of collaboration from Alternative Thinkers. “It’s important that there is a coherence between the message and the ultimate results of a project,” he adds.

Also involved is Zimbabwe-born Natsai Audrey Chieza (pictured in the banner image) who works at the intersection of nature and design. Chieza’s Project Coelicolor is a collection of “data-driven” techniques to dye textiles using “pigment-producing bacteria”. She founded her own agency Faber Futures in 2018, and is looking to “grow relationships” with brands and companies “who are invested in envisioning , prototyping, learning from, and reinforcing equitable models of production”.

Another perspective on materials comes from Seetal Solanki, the founder and director of Ma-tt-er, which aims to rethink material usage. Some of the creatives involved bridge art and design, such as Alexandra Daisy Ginsberg, whose AI rhino was featured in the Royal Academy’s Eco-Visionaries. The Substitute was the result of zoological archival footage and data from Google’s AI branch DeepMind which created a life-size virtual reproduction of a northern white rhinoceros (which went extinct in 2018).

Of the initial projects listed, two are design-focused. Organism Arc, from Charlotte McCurdy is a prototyping project seeking $50,000 in funding. McCurdy’s second project, After Ancient Sunlight, is looking for $20,000 funding in research. More are expected to be added in the near future. 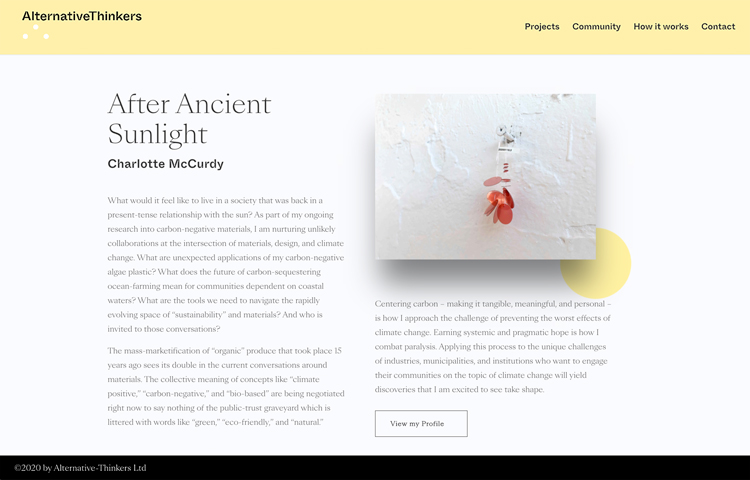