As the COP26 climate conference gets underway, Arup has partnered with the British Antarctic Survey (BAS) and Royal College of Art PhD student Wayne Binitie to develop an exhibition at the Glasgow Science Centre.

Polar Zero aims to connect people with the Antarctic – a place that Arup fellow Graham Dodd says is often hard for people to visualise because it is so far away. By creating a tangible connection between Glasgow and the southernmost part of our planet, he says he hopes more awareness can be raised as to how the world might protect it. 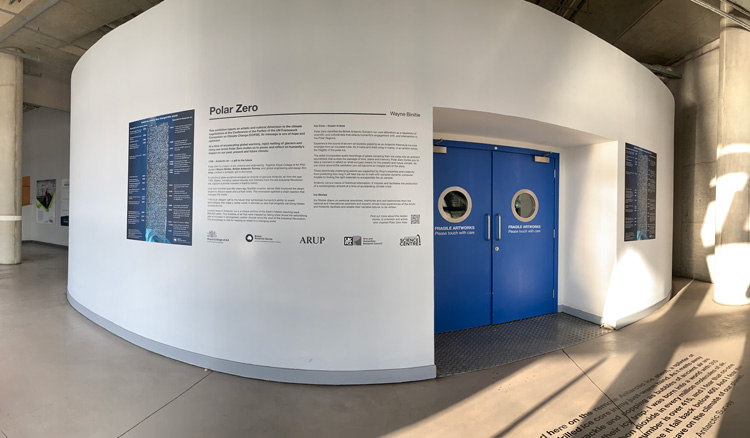 There are two sections to the exhibition according to Dodd, and Arup has designed these spaces as well as providing engineering support for the main exhibits.

The first section has been called Ice Stories. As people approach and depart from the main part of the exhibition, they are confronted with quotes based on first-hand accounts by Antarctic explorers and scientists.

“The idea here was to allow visitors to read the words of these people and appreciate their human reactions to such a dramatic part of the world,” says Dodd. These wall graphics aim to “set the tone” for the remaining exhibition, he explains. 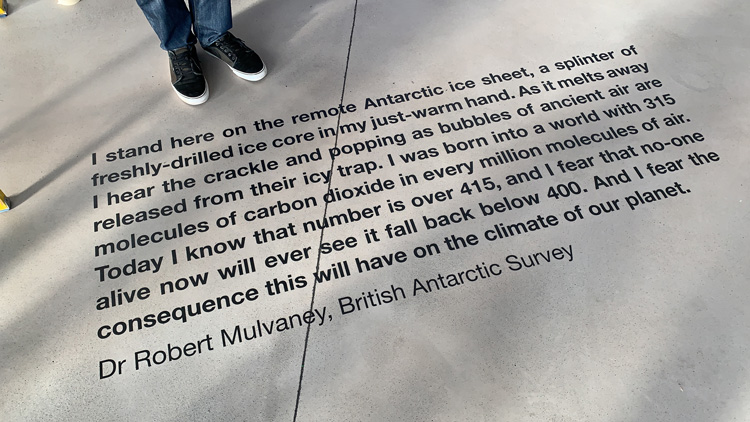 As this is the main part of the exhibition, Dodd says the design approach was to make the space feel “very separate” from the surrounding museum.

To do this, the interior room has been sound-proofed, with draped walls and an acoustic floor installed. “We wanted it to feel like a very calm, contemplative space,” says Dodd.

This, he  says, creates a “natural canvas” and helps to contain a soundscape of “ice sounds” recorded on the Antarctic continent by Binitie. This is blended with music by Maurice Ravel into a composition.

Beyond the soundscape, Arup has further demarcated the room as “separate” with very low lighting. “There is enough lighting to ensure that people can navigate the space safely, but apart from that, we wanted the only light to come from the two sculptural pieces,” Dodd explains.

Binitie’s sculptures are called Ice Cores and 1765. He has worked with Arup and BAS to develop them. Both are presented in large cylinders, which Dodd says have been designed to capture visitors’ imagination.

1765 encases an air sample extracted from an Antarctic ice core. As the name suggests, the core was extracted in 1765 – a date that BAS says predates the Industrial Revolution – and has been preserved since then.

Dodd says the intention was to draw people to the tiny bubbles which exist inside the ice – these bubbles are themselves crucial data points and analysing them can tell scientists much about atmospheric conditions tens of thousands of years ago.

While 1765 is supposed to evoke a sense of permanence, Dodd says Ice Cores is a study in impermanence.  The more interactive of the two sculptures, the installation allows visitors to literally feel how the polar ice caps are melting.

The sculpture features an ice core, drilled from the Antarctic continent and its glass encasing has been partially removed so that visitors can connect with the ice and the water it sheds as it melts. “It’s a really interesting experience, getting to touch and engage with something from so far away,” he says.

Dodd says working on both sculptures was a logistical and engineering challenge, but that the challenges felt like a good metaphor for the wider problems occurring at the polar ice caps.

“The more we tried to calculate things like how long it would take for our ice core to melt, the more we realised how hard it was to predict,” he says. “And that was only for one tiny piece of ice – the problem is magnified thousands of times for the rest of the Antarctic.”

“This is a man-made phenomenon”

Polar Zero opens to the public this week as part of the Glasgow Science Museum’s own programme of events marking COP26 and its status as part of the conference’s “Green Zone”.

According to the museum, the Green Zone is a place where “public, civil society, Indigenous Peoples, youth groups, charities, academics, artists and businesses” can have their voices heard.

For this particular exhibition, Binitie says he hopes “people who experience these works will gain a better understanding of humanity’s impact on the natural environment and its climate systems”.

Dodd adds: “I hope this experience invites people to consider this is a man-made phenomenon – and the amount of knowledge of our own history that is at stake as the ice caps melt.”

For more information about Polar Zero of the COP26 Green Zone, including opening times, head to the Glasgow Science Centre website.