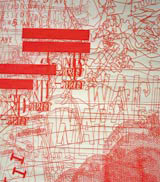 Cor, they put students through their paces these days, don’t they? For an exercise at Kingston University, the illustration class was asked to read Italo Calvino’s philosophical novel Invisible Cities and design their own version of one such fantasy metropolis. Not some Albert Speer scale model, you understand, but a visual interpretation all the same. Now that’s what I call homework.

Georgina Potier (pronounced Po-tier, like Poitier without the extra ‘i’) chose the Spiderweb city. Her strings-and-wires design, which she’s showing me a picture of, is charming – a bit like the Blue Peter advent crown, crossed with the sort of spiky hardware you used to see on The Clangers. There are tables and chairs, a letter and a miniature rose basket, each suspended from a coat hanger frame. But pretty-pretty stuff isn’t Potier’s regular bag.

Last month, she won the design/illustration prize in the Dazed & Confused/Top Shop Re:Creation awards for her screen-print poster, which superimposes a silhouette of a little girl over a full page of text (DW 12 February). Arrestingly, the girl has a white, kidney-shaped hole in her side. As well as being a striking piece of communication design, it’s also highly personal for Potier.

‘The brief was to create a two-colour poster to promote a charity or political cause. I had a kidney transplant as an eight-year-old, so I decided to use my story to promote the Donor Card. The writing is my life story, from day one to now, and that’s a figure of me.’

Winning the competition has led to an offer of work experience from Dazed & Confused, which the 21-year-old will be taking up this summer, after she finishes college. According to the magazine’s art director Peter Stitson, who is to give Potier a commission in due course, ‘Georgina’s work was executed with simplicity, boldness, intelligence and emotion. It was a very pure piece of design rather than style over content.’

Potier believes her abilities lie in ‘bridging the gap between design and illustration’. Her portfolio shows a clear eye for practical, applied design – from her journey planner, with its host of dinky arrows, to instructions for making toast.

‘[Georgina’s skills] suit many pure graphic design briefs,’ Stitson suggests. ‘I could see her crossing over from editorial and print illustration to advertising briefs, even textile designs. Her work does not seem to be part of any trend happening right now – which is one of its strengths.’

‘They’re really nice people,’ she says. ‘There were all different types of people at the party; it was very young and trendy.’ Potier went with her mum. She’s a local girl made good (‘I’ve always lived in Kingston’), but there have been college drawing trips to Lisbon and Seville. The next one is Valencia.

About 18 months ago, Potier took herself to New York, where the innate graphical language of the Big Apple was inspiring. The T-shirts she’s started to print with her own designs (and old school name-tags in the collars) feature line drawings of yellow taxi cabs and Manhattan island.

‘There’s so much to take in, a week just wasn’t enough. I’m not inspired by one particular thing. I’m just always looking really, at stuff I see around me, and going to exhibitions.’

Potier likes artists Gary Hume and Andy Warhol, the latter perhaps being an influence on another college project, where she drew the contents of people’s handbags – travelcards, keys, mobiles et al. ‘I like the way Warhol takes ordinary objects and takes them so far.’ Her style is a tad reminiscent of Warhol’s early commercial illustrations. ‘I love his pictures of shoes,’ she adds.

She is off to Reykjavik, another part of her prize, when the city’s weather is not so cold. ‘I was a bit scared about what I was going to do when I finished college,’ she confesses. Once her work experience is over, she’s modestly unsure of her next move – ‘definitely still working in design though; I don’t want to end up at Sainsbury’s or something’.

All being well, Potier shouldn’t have to resort to shelf-stacking or the supermarket checkout any time soon.