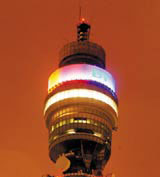 According to BT head of design David Mercer, the Tower’s signage, a ‘major undertaking’ that took nine months to come to fruition, is a ‘creative rendering’ of the BT identity.

‘The BT Tower is a very important building to BT, so we felt it was worthy of something different than what we’d do on our other buildings,’ he says.

‘It’s much more sympathetic to the [building’s] original architecture and contributes something to the London skyline,’ says Mercer, adding that the work does not denote any plans to change the building’s uses or function.

Rufus Leonard, which developed the Wolff Olins-designed ‘connected world’ identity and has since overseen its implementation, created the design concept for the signage. Imagination was responsible for the lighting and design implementation.