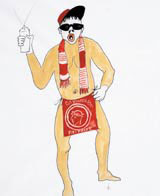 There is no right or wrong way to design a play, only the right approach. That was Jocelyn Herbert’s rule of thumb, passed on to countless trainees seeking advice from the doyenne.

Her long career, celebrated in an exhibition at the National Theatre, spanned five decades, from the post-war flowering of contemporary drama at the Royal Court to a new collaboration with the poet and dramatist Tony Harrison, which she was working on up to the day she died in 2003, aged 86.

A self-styled minimalist and Modernist, Herbert could make period pieces by George Bernard Shaw and Anton Chekhov come alive, but she could also turn her hand to monumental operatic sets for New York’s Metropolitan Opera.

It is clear from the exhibition, however, that she felt most at home with the likes of Samuel Beckett, Arnold Wesker and David Storey, whose no-frills narrative style suited her own inclination to keep everything simple, unfussy and low cost.

Her teacher and mentor Margaret Harris, of legendary design collective Motley, recognised Herbert’s ‘talent in choosing exactly the right elements that are exciting without in any way being distracting. Everything she does is absolutely pure, but always beautiful’.

A good example was the first English language production of Beckett’s Endgame – currently fÃªted in a starry West End revival – at the Royal Court in 1958, which managed to be claustrophobic and monumental at the same time. High stone walls shored up by old beams gave the impression of an old ruin, while the only props on stage were a large throne-like chair and two dustbins. According to the director Bill Gaskill, who was one of the original Royal Court firebrands, Herbert was central to that theatre’s mould-breaking aesthetic, which had everything to do with the text and little to do with extravagant production values.

‘Most of the time designers say ‘I want this because this is how I imagined it’, but [Herbert] would never say that,’ recalls Gaskill. ‘She is the only designer I know who was delighted when a director scrapped a piece of scenery.’

Herbert was by all accounts rigorously self-effacing, expressing thinly veiled contempt for designers and directors who used their skills to work out their ‘psychological hang-ups with some fashionable gimmick’, as she put it.

Two directors she frequently worked with – John Dexter and Lindsay Anderson – were notoriously hard to please, and Herbert’s ability to stand up to them, and invariably talk them round, probably won her as much respect as her graphic and imaginative talents.

‘I do the same job and I know how tough you have to be,’ says a former protÃ©gÃ© Hayden Griffin, who is also one of the exhibition’s designers.

Herbert influenced a whole generation of stage designers, not just with her work but with her heartfelt commitment to ‘theatre magic,’ which wasn’t for her a matter of pyrotechnics or hard cash, but rather the creation of electricity between an audience and the drama unfolding before them.

Jocelyn Herbert at the National runs from 7 April to 22 May. The book Jocelyn Herbert: A Theatre Workbook, edited by Cathy Courtney is published by Art Books International

LDP2 a sole mate of My Shoes fundraiser