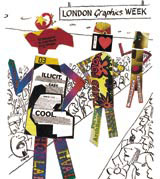 Quentin Newark is the embodiment of the cultured modern designer. He’s talented, runs a successful, much-admired consultancy (Atelier Works), and writes and speaks eloquently about design. He’s also a British Design & Art Direction Executive Committee member, he’s over 7ft tall (well, nearly), and I’m proud to call him a friend. But none of this stops him occasionally talking complete tosh.

A recent Vox Pop (DW 19 February) asked if other design disciplines might benefit from the equivalent of London Fashion Week. Quentin replied that he doubted if ‘anyone could see the point of London Graphics Week’. ‘Would you be interested in seeing Michael Johnson twirling down a catwalk with his latest logo? What graphic designers do is specific to one client, it solves uninteresting problems, it doesn’t have the broad appeal of fashion,’ he added.

Aside from the notion that there may, indeed, be an audience of excitable design fans keen to see Johnson catwalking, Quentin is dead wrong about the lack of an audience for graphic design. It just depends on what sort of graphic design you’re talking about, Quentin. There are two sorts now – it might be argued there always has been, but the difference between the two is now more pronounced than ever before.

The first of these two strands is conventional graphic design; in other words, classical ‘problem solving’ graphic design. The stuff we see every day. And while some of this ‘everyday’ design is remarkable and wholly successful in its effectiveness and functionality, it tends to lack ‘the broad appeal of fashion’, to use Quentin’s phrase. But there’s another kind of graphic design, which is routinely compiled into sexy design books. It’s work that is highly expressive and freed from design’s traditional remit to be purely functional. A list of its practitioners would include Stefan Sagmeister, The Designers Republic, BÃ¼ro Destruct, Airside and perhaps a few hundred other small groups and individuals.

We’re still taking about graphic design here. It hasn’t suddenly become art, despite often being surrounded by fanciful conceits like ‘graphic authorship’, and notions of the ‘designer-as-author’. It uses the same syntax as conventional design – typography, pictures, graphic imagery – and it has clients and is done for fees. But it often escapes some of the mandatory requirements of conventional design, such as legibility, directness, clarity and conveying messages. And it doesn’t exclusively deal with problem solving. Sometimes it just has to look good.

The development of this sort of graphic design has been boosted by a number of factors. One is the appearance, over the past decade or so, of publishers aggressively promoting design books. Older designers will remember the dearth of good design books in the pre-1980s era. But today the opposite is true. There are now too many. The second factor is the great rise in the number of students choosing design as a career. Vast numbers of students are studying design in colleges all over the country, and their interest and hunger for graphic sensation is fuelling an entire subculture of design. But perhaps the most interesting factor is the arrival of a new audience for design from outside of the professional world. In other words (and you may want to sit down for this, it’s a bit shocking), people with an interest in graphics who are not necessarily graphic designers. It’s true. Who do you think buys all those sexy books? It can’t just be graphic designers, can it?

This new audience for graphic design convinces me Quentin is wrong to say the medium is too narrow to excite widespread interest. We’re already past that point. For example, last year’s Peter Saville Show at the Design Museum (now at Manchester’s Urbis) generated substantial coverage in the mainstream media. And this autumn the Barbican is staging a large-scale, 40-year retrospective of British graphic design. I’m sure it won’t market this exclusively at design professionals and we’ll see extensive coverage beyond just the design press.

Traditional graphic design shouldn’t feel threatened by this bawling, sometimes badly behaved offspring. Nor should it try to look the other way, as if nothing is happening. Big-spending clients may say they want the sober calculations of well-researched and market-tested design rather than the rebel yell of free expression. But no harm can come to traditional design by asserting its kinship with radical and experimental design. So c’mon Quentin: I can’t think of anyone better to chair the London Graphics Week board of directors.