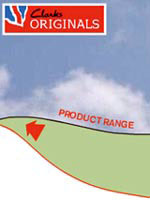 Airside has completed the first standalone website for shoe brand Clarks Originals for a fee believed to be close to £100 000. The site, www.clarksoriginals.com, goes live on 7 August.

The consultancy was appointed in March by St Lukes, the ad agency handling the Clarks Originals account (DW 21 March). The ethos of the website is ‘doing your own thing’, says St Lukes Web and interactive producer Gidon Cohen, with the aim of giving the brand its own quirky, eccentric personality that is independent of fashion trends. Previously, the brand ‘has come in and out of fashion’, he adds.

Along with product information, the website features details of ‘activity clubs’ from around the world, such as a Swedish Cadillac club, an extreme croquet club in San Francisco, a Tokyo ukulele club and the London-based Octopush, which plays underwater waterpolo.

The other major design element is a ‘scrapbook’ charting the events, trends and vogue objects of the late-20th century that matches a Clarks shoe to each decade, says Airside director Alex Maclean.

He adds the site features ‘a huge amount of animation’ and several complex ‘hand-drawn’ designs.

‘Airside led [the project] in terms of coming up with ideas,’ says Cohen, while St Lukes ensured the style blended with the overall rationale of the campaign.

The group originally approached St Lukes at the end of last year to tout for work, with a portfolio including its Jam and Tokyo London credits, says Maclean.

Clarks Originals, famous for its desert boot, is part of the Clarks International group. It appeals mainly to an overseas audience and is considered more fashionable than Clarks’ main UK range, according to industry sources.