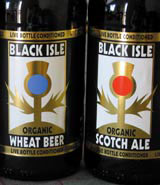 A simple graphic representation of a Scottish thistle adorns the labels of these beers, which are brewed in Scotland. ‘They are instantly identifiable,’ says in-house designer David Gladwin. Camra’s Ashworth agrees. ‘The designs are modern and eye-catching, and not aimed at the traditional beer drinker.’ The beer is, in fact, ‘aimed at no-one in particular’, says Gladwin. ‘We wanted to move away from beer’s fuddy duddy image,’ he adds, ‘and make it contemporary and approachable for younger drinkers.’ Black Isle’s pump clips, letterheads, business cards and vehicles all feature the thistle icons.