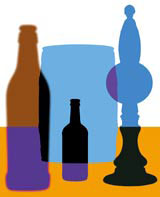 Curious passers-by, tipplers and serious drinkers can gorge themselves on beers of all description at next week’s Great British Beer Festival. But what’s in it for the design fan?

Beer has long been a fruitful source of design work for consultancies, from bottle design to brand identities and packaging, and creatives could do a lot worse th

an pop down to London’s Olympia for inspiration. Just don’t make plans for later.

Camra has selected its design favourites from this year’s festival, including beers aimed at men and women. We showcase them here.