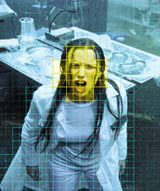 And the design community is playing along. Third Planet is branding the Sega GT 2002 game, while Random Media is working on Sony Computer Entertainment Europe’s launch of Ratchet and Clank. The film version of Resident Evil hit the big screen last month with input from Arnold Interactive.

But how do designers create a marketable brand for products that are premised on highly interactive virtual worlds? And what challenges do they face communicating the ethos of a game across different media?

Arnold Interactive creative director Alasdair Scott says it can be difficult to extend game brands into print, Web and packaging formats. He believes it’s hard to recreate the excitement people feel through personal immersion in a game.

Random Media creative director Mickey Stretton thinks designers should make more of a game’s visual cues, by playing on its experiential devices. He designed the website for Ratchet and Clank, along with off-line marketing. The site closely resembles the game. Users navigate via game-play techniques, such as ‘bombing’ particular areas.

‘A gaming website shouldn’t just give information about the game. It should re-create the experience. Instead of a menu of weapons we’ve used a shooting gallery game to display them. Users need to shoot the weapon to find out more about it. This isn’t in the actual game, but it could be,’ says Stretton.

The play element is also present in Random Media’s approach to print. A trump card game has been developed to enable players to continue the interactive experience ‘in the school yard’, he adds.

Stretton says the key to branding a game, as with other products, lies in identifying its point of difference. ‘With Ratchet and Clank, what distinguishes it is the number and type of weapons available, so a lot of our activity focuses around this,’ he says.

Scott agrees this is the right line to take, but he says it doesn’t always need to be a visual theme. ‘A screenshot doesn’t deliver what a game is all about,’ he says. ‘You need to get down to the real essence of the game, its story line, characters or other [differentiator] and work with that, rather than simply try to translate game play.

‘With Resident Evil [the essence of the game] is a voyage of discovery, from a clean, light environment to one that becomes dark and malevolent over time. That’s quite a translatable theme and, although it isn’t a visual reference, you’re using an identifiable mechanic,’ he explains.

Few game manufacturers are willing to develop radical new games though, says Third Planet creative director Marc Woodhouse. He likens the process to movie-making, where the huge costs involved in developing a game mean that sequels and ‘tried and tested’ genres are becoming more prevalent.

So what do designers use if there is no unique asset?

In this case, designers must create assets, Woodhouse suggests, ‘something like the Nike swoosh’, that can be used separately and act as a de-facto identity for the game.

‘Sega GT 2002 already has a logo, but has no real unique selling proposition. We had nothing specific to hook [the brand] on and were brought in late in the process. We’re also restricted by what other games like Gran Turismo have already done.’

Third Planet’s solution was to create a ‘sub tag-line’ that acts as a central pivot to all branding and exemplifies the game’s essence, in this case selling the idea of ‘escapist racing rather than driving’, says Woodhouse.

‘It’s not just a throwaway line, it sums up what the game’s all about. We might also create an identity [from it] to use as a teaser with some visual cues from the game,’ he adds.

Woodhouse also feels that clearly identifying the game’s different audiences is important. Third Planet worked on Activision’s Tony Hawk’s Pro Skater. The game targeted skateboarding enthusiasts, but has developed broader appeal across the wider game community. Woodhouse says getting the branding right was an important part of the game’s success in the UK.

‘The logo was American and said all the wrong things. We included it, but basically ignored it. We never used the pack, it just wasn’t cool.

‘The real asset was Tony Hawk, so we created branding that sold skateboarding rather than just the game. Executions used pictorial sequences like those in skateboarding magazines. We used the same execution across all media and what helped it work was staying true to the sport the game was trying recreate,’ he explains.

Not every game brand can be spun-off such ‘real-life’ celebrity endorsement. But when creating brands that capture the buzz of computer gaming, the lessons for designers seem obvious. Remember to be consistent in your approach, respect your audience and keep it real.