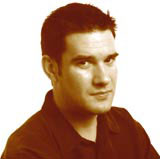 Tall, dark and softly-spoken, Innes Ferguson is a cosmopolitan Scot at home in the big city. He cites Samuel Johnson’s adage about being tired of life when you’re tired of London. Which is just as well really, as Ferguson is head of design at Transport for London – Mayor Ken Livingstone’s vehicle for co-ordinating transport provision – and responsible for the shape and appearance of some of the capital’s most visible brands.

Last month, he oversaw the extension of the London Underground roundel to river, taxi and street management services, as well as the Docklands Light Railway and TfL’s own logo (DW 4 July). Fitch London carried out this work (river roundel pictured below), but the provenance of the original design is something of a mystery. No single author can be identified for the marque, which dates from Edwardian times. For Ferguson, this seems to symbolise his place in the scheme of things.

‘I’m only here for a limited period of time [on earth], but the roundel’s been with us since the turn of the last century.’ His employers must hope he’s expressing humility, instead of any nascent career development plans.

It’s been a rocky ride for TfL’s design team over the past two years. The two previous heads, Corynne Bredin and, before her, Christopher Nell, both left abruptly. Ferguson, in charge for almost a year, says he only confirmed his contract last week.

Fortunately, awareness of the right kind of heritage guides his approach. Ferguson would rather talk of ‘custodianship’, than be described as a brand guardian.

‘That’s a bit too modern for us as a company. We’re heading towards more brand awareness, but we’ve got to watch out that [the vogue for] branding as an idealogy could be quite transient.’

Ferguson, who speaks as intensely about fashion design as he does architectural form, is mindful that TfL’s output must be built to last. This applies to every specification, from used ticket bins and bus shelters to the fabric on a new Tube train seat and even the carriage itself. A £20m design budget and a broad-based, taxpayer audience bring certain conditions.

One-size-fits-all is a given. As Ferguson points out, ‘We don’t have a hierarchy of solutions. What we provide has to work at all points north and south. It’s not like putting a consumer product up against a price point or a design look. We don’t have the option of not fitting a help-point, say, into a particular station because we don’t like that station.’

Such a challenge appeals both to his sense of aesthetics – he admires the ‘Scandinavian design ethos of less is more’ along with ‘Japanese purists’ like clothes designer Yohji Yamamoto and architect Tadao Ando – and his political beliefs. ‘[The caveat] is fantastic because it reeks of good old socialism,’ he says.

Although Ferguson claims he’s too diplomatic to wear such convictions on his sleeve, it is obviously civic sentiment that’s propelled him from working alongside architects Piers Gough and Nigel Coates to his present post.

‘I was one of those people who used to moan about “bloody public transport”, but was encouraged to do something about it by meeting Jeremy Rewse-Davies [then London Transport’s head of design] at a Royal Society of Arts do, and a whisky or two one Saturday night after seeing the job ad.’

That was around six years ago, when he had his own ‘modern ironmongery and interior fixtures’ business in Portobello Road. It was ‘a bit of a bizarre change’ to switch to TfL, Ferguson says, but he’s happy with the diversion.

Though sceptical about the PPP (public private partnership) deal for the Tube, he has to live with it. ‘Trying to adapt and integrate design into that changing working environment. That’s where we are now.’ TfL commissions design in three ways, he adds. It can be proactive, identifying a particular need – ‘signage is a classic for that’ – or reactive, for example, helping London Underground with a problem it’s been unable to tackle, or it can offer ‘purely consultancy’. For instance, on bus vehicle design.

As for relations with consultancies, TfL is currently finalising its plans for the next three years. Ferguson doesn’t like the idea of rosters – ‘that always suggests to me you go round in a circle’. Instead, TfL has ‘frameworks or pools of consultancies’, he says. ‘And it’s important to have diversity of size and specialisation in each of the three areas, graphics and corporate identity, architecture and interiors, and product design.’

Briefs range from the ‘perfunctory’ implementation of design standards to ‘blank sheet of paper’ projects, like BamberForsyth Fitch’s work now underway to develop a coherent brand for the overland metro system. ‘[The idea’s] not all that well-formed, but we’re looking at having more synergy or parity across the different train operating companies,’ he says. Architect Richard Rogers is designing next generation bus shelters, but Ferguson also heralds the past efforts of ‘unsung heroes’ like Jedco’s John Elson and Bermondsey Tube station architect Ian Ritchie.

Design education is a ‘hobby job’ and Ferguson is proud of TfL’s sponsorship of a D&AD Student Award this year, for silent movie advertising. ‘One of my on-going battles is to make design more egalitarian or accessible and not be seen as an elitist thing like a label.’

But he doesn’t frown on consumer goods. He loves shopping and wants an Apple MP3 player, just to put on the mantelpiece and go ‘wow’. ‘I’m a man of great contradictions,’ he laughs.