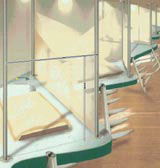 Grotty youth hostels could be a thing of the past if a design-led concept now being developed in London proves a hit with its 20-something target audience.

Entrepreneurial company Captive Enterprises begins construction work next month on The Nest, which is based around a sleeping zone created by designer Olivia Walduck.

Scheduled to open in December, The Nest uses design to overcome traditional problems of hostel living, such as lack of space, privacy and security, says Captive Enterprises director Jonathan Dalton.

‘[Most] hostels haven’t progressed in design terms over the past 30 years,’ he suggests. ‘We’ve identified a need for a less mainstream venue for cool young people coming to London who need a short-term base.’

The Nest will be located near Spitalfields, a ‘fringe location’ east of the City, which has been deliberately chosen to appeal to more adventurous and knowledgeable young travellers.

Walduck’s sleeping pod is inspired by Japanese capsule hotels and sleeping areas on boats, says Dalton. Multi-coloured polycarbonate screens around the sleeping bags deliver privacy, while units of four beds are suspended in the centre of the space like ‘installations’. Each guest is given access from their own side of the room.

Doors will be made from tempered glass to allow natural light to filter through to corridors. Lounge areas feature Arne Jacobsen’s Egg chair, chosen because of the feeling of privacy sitting in it creates, says Dalton. The Nest will also offer office space with workstations and a ‘trendy’ public bar, he adds.

Dalton expects consultancies will be required later this year to develop identity, signage and marketing material. If successful, he plans to take the concept to other sites in London, as well as to Amsterdam, Dublin and Paris.