With the design industry under the spotlight, the aim is to work towards positive cultural change. John Stones previews two London exhibitions showcasing the best in British design and setting the challenge for the future

Britishness in design seems to be, very much, the theme of the moment. Not only exhibition curators and televisions producers, but politicians too, have suddenly woken up to the value of promoting what is peculiarly British in design – think of Chancellor Gordon Brown’s very public courting of design and the Cox Review. London’s successful bid for the 2012 Olympics has only underlined what a transformation designers could effect on Britain.

New Labour’s honeymoon dalliance with Brit pop and fashion – the now blush-inducing Cool Britannia episode – has been replaced by a more mature understanding of British creativity. And, of course, much of British identity, both at home and abroad, does indeed rest on certain – perhaps now overexposed – design classics. We all know what they are: the Mini, the K2 telephone box, the London Underground Map, the Routemaster bus and so on.

Two exhibitions open this week in London, looking at this design inheritance from different vantage points – The Design Museum, with its Designing Modern Britain show, and the Theatre Museum, with Unleashing Britain: Ten Years that Shaped the Nation 1955-1964. Of course, we have been here before, the most notable example being the Festival of Britain (pictured right), now canonised in the design hall of fame and one of the landmarks to be reconstructed in the Design Museum exhibition. It looks like being an unashamedly populist affair, with a concurrent Great British Design Quest, inviting visitors to vote at the exhibition, or on-line, for their favourite British design icon. 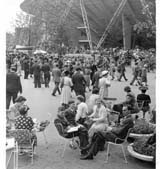 A more nuanced and subtle approach is being taken by the Theatre Museum. It takes the 50th anniversary of the openings of two seminal theatrical productions – Samuel Beckett’s Waiting for Godot (pictured top) and John Osborne’s Look Back in Anger – as the starting point for an investigation into the country’s reinvention, which then led to the flowering of the 1960s. It does so by looking at a full range of visual culture, not just production design – the work of Terence Conran, David Bailey and Mary Quant, as well as contemporaneous advertising and packaging, is included.

Looking at the past in pleasure is all very well, but looking into the future is where the excitement lies. Foreign Office Architects’ proposal for the London Olympic Stadium, included in the Design Museum show, demonstrates the level of work that design, as a whole, will have to emulate, if it will positively impact on our lives, rather than just act as a defence of British interests in the face of global, commercial competition.

Unleashing Britain: Ten Years that Shaped the Nation 1955-1964 runs until the end of 2006 at the Theatre Museum, Russell Street, Covent Garden, London WC2