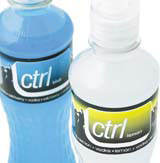 Anglo Drinks is trialling an innovative bottle design for vodka-based alco-pop Ctrl, which seeks to guard against the spiking of drinks.

Caspa Marketing has designed the brand identity and packaging for Ctrl, currently available in two different flavours, lemon and blueberry. The 400ml plastic bottles feature a sports valve top with a resealable lid designed to stop spillage and prevent drinks being spiked. An unnamed Irish engineering firm was drafted in to help manufacture its structural design.

The project, estimated to be worth £60 000, was conceived in a bid to create a more socially-responsible product that best suits its target market, says Anglo Drinks marketing director, Andy Howe.

‘We looked specifically at the nightclub sector to come up with a product that resolved many of the problems associated with drinking in a club. We wanted to create a drink that you can carry around with you, won’t spill, is safe and made from plastic, and stops spiking. The consumer has a concern and packaging is key to this,’ he explains.

The product is currently being trialled in student union venues and selected clubs across the UK this month. Anglo Drinks will analyse consumer reactions in the run-up to Christmas with a view to launching Ctrl in February or March 2006. Caspa Marketing has worked with Anglo Drinks on various projects for the past three years.