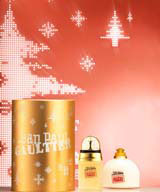 When shopping for something special for that special someone, do consumers really want to see the same tired old clichés on packaging? To achieve stand-out during the festive season, David Benady says less is sometimes more

Christmas is coming and brands are plastering the usual yuletide clichés across their packaging. Out come the white-bearded Santas, red robins bobbing over snowy fields, glittering baubles and exploding crackers of the traditional chocolate box Christmas. But they all seem to merge into an indistinct mass as the big day approaches.

Brands seem to forget their raison d’être – to stand out from the crowd – at the one time of year when consumers really are willing to be seduced by luxurious packaging designs. No wonder they are so often accused of jumping on the Christmas bandwagon.

But there are some happy twists to the Christmas packaging story, says Vicky Bullen, chief executive of Coley Porter Bell. ‘It works really well when it is integral to the brand and engages consumers – something that gives you that same tingling sensation you had as a child, the night before Christmas,’ she says. One example of this is the Harvey Nichols Christmas Pudding packaging, designed by Michael Nash Associates, which bears a large sixpence, she says. Another is Starbucks, which introduces seasonal red cups as Christmas approaches. And, of course, the daddy of them all is Coca-Cola, which took ‘ownership’ of the image of Father Christmas, through its 1931 design of the tubby, red-suited Santa, by artist Haddon Sundblom. This is used in its advertising and sometimes features on multipacks.

But overt references to Christmas may mean retailers are left with stock which looks as stale as old turkey, once the big day has passed. ‘If you go with a Christmas pack, what do you do once Christmas is over? The big retailers will say they want the brand owner to pay for the discount or pick up the leftover products and take them away,’ says Satkar Gidda, sales and marketing director at Siebert Head and a former marketer at Rowntree Macintosh.

One way around the problem is to make the packaging festive or seasonal, so the goods can continue to sell up to New Year and into January, says Gidda. This requires using themes of general winter festivities, such as woolly hats and frosty windowpanes, rather than direct references to Christmas, such as Santa Claus and sleigh bells.

Another method is to use ‘over-wraps’, which can be put over the product in the run-up to Christmas day and taken off unsold goods afterwards. This approach is particularly prevalent for wines and spirits. Even ‘reassuringly expensive’ beer Stella Artois has got in on the act, with special edition tube casing that borrows the category language of a premium whisky bottle, designed by Jones Knowles Ritchie. Meanwhile, other brands use limited edition packs with specific Christmas branding.

Allison Miguel, creative director of Ziggurat, says it is important to avoid being too literal with festive packaging. The multicultural nature of society, where Christmas is seen as a winter celebration, rather than a religious festival, means care has to be taken with the use of symbols. ‘It’s about using colours that feel festive, such as rich reds and greens or golds and silvers, where they aren’t usually used on the brand,’ she says. Part of this approach can entail using a candle-lit effect or portraying stars (part of the biblical story), by having photographs that are slightly out of focus with a sparkling effect.

On the other hand, for everyday products, more obvious Christmas symbols may be in order. ‘For KP Christmas nuts packaging, it was a simple idea of dressing up the KP logo with spray-on snow, lights and tinsel. It is more straightforward for a down-to-earth, everyday product,’ says Miguel. In the same way, logos on Mini Cheddars tubs have been transformed into Christmas characters.

When it comes to creating packaging for special gift products, avoiding the overused clichés of Christmas is especially important. Andy Knowles, a partner at JKR, claims the Christmas gift packaging it created for personal care brand Molton Brown helped it double sales around Christmas time. ‘But it doesn’t have to be in a crass, nasty Easter egg type of way. There is a tendency to exploit the occasion with gift packaging. Doing something understated, but plush, makes a huge difference,’ he says.

He says brands should never underestimate consumers’ ‘insatiable desire for novelty’. That could mean selling popular products in multipacks or spicing up packaging with luxury cues, such as ribbons, gold colours and foil board to create a ‘masstige’ (mass prestige) feel.

It is important to ensure retailers get behind gift packaging. In the case of Molton Brown, John Lewis built special displays for the products because it liked the gift-wrapped packaging, says Knowles. He adds that gift packaging has to be of a high enough quality to put the product directly under the Christmas tree.

But perhaps a little less ‘yo-ho-ho’ and a bit more ‘bah! humbug’ is needed to ensure a brand’s Christmas packaging stands out from its rivals and is relevant beyond 25 December.