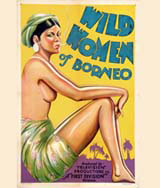 If you’re hooked on collecting film posters, you’ll know that Tony Nourmand, co-founder of London’s Reel Poster Gallery, is the dealer extraordinaire. But now Nourmand is selling 299 exploitation movie posters at Christie’s, dating from the 1920s to the 1990s, with prices expected to range from £300 to £1200. And it’s a ‘corny-copia’ of schlock.

You could write a potboiler by shuffling the 1930s titles, ‘Call Her Savage, but she was one of those Wild Women of Borneo, a real Hot Pepper, and everyone knows Ladies Love Brutes.’ By the 1950s, such sexual rough-housing had given way to pin-up ogling, diaphanously veiled as shrill paranoia. ‘Teens in peril’, these graphics shriek, but it’s mostly about dames, apparently itching to get out of their pantyhose. In the 1960s things seem more adult, albeit in the Russ Meyer sense.

Above the fray is Alan Aldridge’s classic design for Chelsea Girls and Hap Hadley’s artwork for Howard ‘The Aviator’ Hughes’s 1932 romp Cock of the Air. Without the cultural background, it’s hard to tell, though, how tongue-in-cheek all this pre-tabloid soft-core really was. Where’s Germaine Greer when you need her?