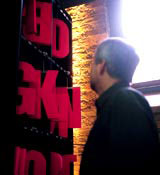 Think of British Design and Art Direction as a boulder rolling down a gentle slope. It has its own momentum and is moving in a particular direction. A new president has the opportunity to give it an additional push, to perhaps nudge it this way or that. A significant influence then, but ultimately one that is governed by the strategic objectives that have already been laid down by the denizens of London’s Graphite Square.

This makes sense. After all, the organisation would go nowhere fast if the first action of every new president was to methodically unpick the good works of their predecessor. Transferring resources to the incomer’s particular “pet issue” from one year to the next would simply result in a mish-mash of half-finished initiatives and broken promises. When you consider the very different backgrounds and personalities of the various presidents who have served during David Kester’s six-year tenure as D&AD chief executive – they include Lewis Moberly’s Mary Lewis, maverick commercials director Graham Fink, CDT’s Mike Dempsey, Adrian Holmes of ad agency Lowe Lintas and media-friendly Richard Seymour – it’s easy to imagine the diversity of personal styles and preoccupations each brought to the table.

“[Incoming presidents] bring bundles of industry experience to D&AD,” confirms Kester. “They are senior, expert people who are given the opportunity to develop ideas within the long-term strategic framework of the organisation. This ensures that we don’t go through a sort of pendulum process each year.” Fair enough. But how do you judge if their tenure has been a success? Can you measure one up against another? Not particularly, as one term dovetails into another, and specific projects set in motion several years earlier happen to come into fruition during their reign.

One thing’s for sure. Larry Barker, creative director of the consistently inspired advertising agency BMP DDB, which looks after accounts for Volkswagen, London Transport and Budweiser among others, had a tough act to follow. Seymour Powell partner Seymour was a natural, charismatic leader with experience of both design and advertising and was a skilful, high-profile apologist for D&AD – as Kester puts it, “He’s a renaissance creative, the very embodiment of what D&AD represents”. Barker’s style was lower key, but just as effective. “He’s a very thoughtful person, and good at putting his thoughts into words,” says Kester. “Being able to crystallise a view by getting it down on paper avoids confusion. As the creative director of a major advertising agency, he’s also a team player and knows how to inspire people.”

Now 41, Barker was one of D&AD’s younger presidents, bringing a much-needed vitality and energy to the position. However, he is still very much hands-on tiller at BMP and couldn’t perhaps devote quite as much time to the job as someone who ran their own business or was in the twilight of their career. During his presidency, membership of D&AD increased from 1600 to over 2000, and awards entries also mushroomed.

Kester is particularly gratified that 55 per cent of work in the current annual is from abroad, confirming D&AD as “a benchmark for creative standards internationally. We had entries from India, Singapore, the US, everywhere you can think of. The president really needs to understand [that he/ she needs to] get behind the fundamentals of D&AD – [Barker] has very much done that,” says Kester.

“The areas I chose to concentrate on were all kind of related,” says Barker. “It was important to select a couple of well-chosen targets, rather than doing a bit of everything and achieving nothing. They arose naturally out of my experience working in advertising.”

No mean wordsmith himself, one of Barker’s primary objectives was to increase the profile of writing skills in the creative industries, which have been accused – like the rest of the media – of “dumbing down”, pandering to the immediacy of the visual hit while neglecting the more subtle, slow-burn effect of persuasive writing. One of the first, small but significant steps he took was to ban the word “copy” from the D&AD lexicon and replace it with “writing”.

As he explained in D&AD’s quarterly journal Ampersand, “Quentin Tarantino writes. Will Self writes. I don’t see anyone telling them that their craft is a dying one. The word copy has become a victim of its own bad publicity hopefully, with its banning a whole load of writers will come out of the woodwork and re-invigorate a craft that is at the heart of what we all do for a living.”

A bold move, and certainly one which reflects the changing face of advertising creative departments, where the traditional art director/ copywriter axis is being replaced by a more fluid, team-based approach, where good words (or visual ideas for that matter) are accepted from any quarter.

This year’s D&AD call for entries also reflects efforts to improve the standing of writing within the creative community. It now has its own category (encompassing both design and advertising writing) and has been moved well up the pecking order (sitting pretty between branding and graphic design). “It’s a very robust action, giving [writing] a higher profile,” says Kester.

A student writing competition (The £1000 New Writing Competition), open to non-art and design colleges and launched in association with the Guardian and the Co-op Bank, was another of last year’s standalone initiatives. Again, Barker was consolidating progress that had already been made by D&AD in this area over the past few years, with projects such as the publication of the D&AD Copy Book.

Another of Barker’s bugbears was the dearth of women in advertising creative departments. Research conducted with the Institute of Practitioners in Advertising confirmed his worst suspicions, revealing that there were just two women creative directors in the Top 20 advertising agencies, and that female creatives accounted for only 17 per cent of copywriters and 14 per cent of art directors.

“Clearly we need to find a method of entry into creative departments that doesn’t prejudice against women,” says Barker. “Instinct told me that the heart of the problem was the laddish culture of creative departments. This piece of research backs up that hypothesis. The system is broken and it needs fixing.” Peter Souter, executive creative director of Abbott Mead Vickers BBDO, has been charged with looking further into this area.

A step towards this long-term objective was the advent of Bloodbank (www.dandad.org/gettyonebloodbank). Launched last November, it is an on-line recruitment and matchmaking service for young talent which addresses the entry, training and retention of recruits to the creative industry. Already, it’s proved to be an unqualified success. The first raft of available statistics show that in just a month, the site attracted 3211 registrations – 60 per cent from the UK, the rest from 65 different countries across the world. “It’s working,” says Kester, “and has surpassed all our expectations.”

Also in response to Barker’s agenda, a creative training and development programme was set in motion. After a round of rigorous discussion groups and survey work, a series of modules has been developed, and is due to be unveiled in the Spring.

“It was a huge honour and not too onerous,” says Barker of his presidency. “I am glad I can say that I have done it and, hopefully, I can continue to help in some sort of advisory capacity. It was very satisfying to put something back into an industry that has been very good to me.” So as Larry Barker says goodnight from him, a few more seeds have been sown which will no doubt bear fruit during another presidency, and the D&AD boulder keeps on rolling.

Paul Smith to cut a dash in Milan