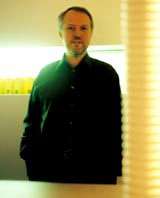 You can’t fault David Stuart’s credentials for the British Design & Art Direction presidency. There are 14 D&AD yellow pencils on display in the reception area of The Partners – the consultancy he co-founded in 1983 and of which he is creative director – each won for a stunning piece of graphics work.

As at D&AD, creativity is a by-word in the office in London’s Smithfield. The Partners has ranked top of Design Week’s Creative Survey for two out of the past three years, partly on the strength of those coveted yellow pencils, but also through honours such as Design Week’s own Victor Ludorum, awarded in 1994 for outstanding achievement that year.

Stuart is well prepared to take on the job. The Partners co-founder and managing partner Aziz Cami held the D&AD presidency in the dark days of 1992, when the organisation was going through radical change as it strived to haul its way back to profitability under the stewardship of its then director Anthony Simonds-Gooding.

Stuart’s task should be easier, in that financial and constitutional issues have been sorted out and the organisation is thriving. But design presidents such as Mary Lewis (1995) and Richard Seymour (1999) have set a tough agenda and are hard acts to follow.

Stuart has been very active in his year as president-elect during BMP DDB creative director Larry Barker’s presidency and is already popular with D&AD staff for his commitment to the organisation. “It’s a good ship,” he says. “The staff are very motivated. It’s the place where rockets come from [a reference to the nearby MI6 building, favoured by James Bond].”

But what can we expect now that he is on his own? Not surprisingly, “Time to get serious about creativity” is his rallying cry, something he intends to achieve through “influence”. “The desire to influence is part of the designer’s role,” he says, relaying plans to influence by example through a series of stimulating President’s Lectures from the likes of Seymour, photographer Martin Parr and Pentagram partner Michael Beirut, among other initiatives.

The official D&AD statement on his accession cites a number of “influential” events that will happen throughout the year, several of which were hatched by Barker. Top among these is Superhumanism, billed as “an international creative forum” to be held in London on 29 May to “invent” a “more humanistic creativity”. It’s taken at least 18 months to organise, with the support of at least two past presidents, so it cannot be claimed by Stuart as his own.

There are plans to make even better use of D&AD’s influence in education. Due to launch in April, a development programme for young professionals will be put in place in September to stimulate new ways of thinking through exposure to mentors in related fields.

More directly attributable to Stuart is The Graphics Book by Jane Austin, commissioned by D&AD as part of its Mastercraft series and an obvious sequel to Catherine McDermott’s Product Book, produced during Seymour’s reign.

Then there are the D&AD Awards. We can already thank Stuart for pushing through the newly introduced Writing for Design category. Now he plans to instill a new sense of generosity in the judges, renowned in the past for their meanness of spirit towards their peers.

But Stuart’s greatest challenge lies in what is not on the list. Past presidents have promised to bring together advertising and design through D&AD, but even though the paths of the two professions increasingly converge, none has yet managed to deliver. The Partners is one of the few design groups to collaborate with ad agencies or even cross over into advertising, most recently for its Wedgwood work, so Stuart is directly appraised of the differences.

“We have had a good experience working with ad agencies. We understand how to work with them,” he says. “We’re in a golden age of creativity and people will work together more and more.” Stuart isn’t in favour of any consultancy being a one-stop shop – perhaps the motivation behind last year’s sale of The Partners to Sir Martin Sorrell’s WPP Group. His response to clients’ need for bigger solutions to bigger problems is, “We have to do it mob-handed”. He says creative agencies need to learn “how to take trust – and ego – to the table to achieve something for our client rather than for ourselves”.

And then there is the question of design within D&AD. By alternating advertising and design presidents, the organisation at least honours its design membership, but despite Seymour’s thrust into product design it is largely perceived as a graphics organisation by the design community – and elitist at that. The ten-strong executive committee Stuart will chair includes only graphics’ related talent – himself, Keren House, Michael Johnson, Lynn Trickett and Glenn Tutssel. He will need some bold initiatives or an active policy of co-opting people to bring 3D and digital media into the fold.

“I hope it won’t just be a graphics year,” he says. “Most visually expressive things communicate and can be far more expressive than a 2D item.” But he offers no solutions at this stage.

Design is at a turning point, with creativity and good business sense starting to combine in a way never before recognised. We can expect Stuart, whose own business is commercially successful, with design fees of £5m-plus on £7.5m turnover recorded in Design Week’s 2000 Top 100 Consultancy Survey, to champion this convergence, and he plans to bring more clients on to awards juries “to bring reality” and “judge communication, not fine art”. “We are a business dealing with businesses,” he says of design.

Stuart doesn’t see D&AD as taking a central leadership role within design. In the Design Business Association’s leadership debate late last year he made the case for the status quo, with representation shared by a handful of official bodies. “I can’t see that their amalgamation is to the industry’s benefit,” he says. “That is not where the problem lies.”

He says design is treated like a commodity by clients because there is too little work for too many consultancies. He cites Department of Trade and Industry figures which suggest that 75 per cent of the key 3000 players in design pitch towards the top 100 clients in terms of size. The answer for him is for design groups to align with other disciplines to offer a service that is more fulfilling to clients.

He also says designers generally lack confidence. The industry is made up of craft-based monks, messengers and kings (visionaries such as Pentagram partner John McConnell), he says, with a novice ideally progressing up the chain from one state to the other. “All ought to aspire to be kings,” he says. “But too many people’s aspirations don’t go that far.”

What Stuart hopes most for his presidential year is “to hear discussions about collaboration and collective confidence”. They’re not new objectives, but it will be interesting to see how he rallies his supporters to spread the word. Long live the king.

David Stuart’s CV, in his own words

1968Graduated from Harrow School of Art

1973Founding member of the Museum of London design department

1981Formed The Partnership with Keren House

1992Co-authored A Smile in the Mind with Beryl McAlhone, a book on creativity and wit

1995Finished A Smile in the Mind

1997Creative Director of The Partners