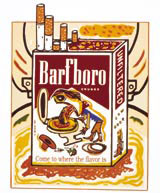 Much of the content of Empire is along these lines. It wants to protest in the strongest possible terms, but it is unsure of its targets. The premise is that America is an empire so vast and interconnected that through simple acts like drinking soda or starting your car, you are made complicit in acts of evil.

One poster features an unflattering photograph of Martha Stewart, supposedly featured on the cover of her own magazine, Living (Stewart was recently convicted for lying about selling shares). Just to make sure we understand it is satire, the designer, Robbie Conal, has changed the title of the magazine to Lying.

Weaker still is Art Chantry’s image of a boy turning a television on, only to watch a picture of a boy turning on a television, with the caption ‘this is the modern world’. Paranoia so old, it’s toothless. But the great Stefan Sagmeister has contributed a piece. As usual, it consists of photographs of him, wearing clothes for a change. He walks around New York finding signs that say Empire, adding, ‘I don’t think I live in an empire.’ I shiver with the power of it.

The strongest works are those that accept that our problems are diffuse and hard to pinpoint. An illustration by MK Mabry shows a dozen eyes peering down holes ready to smash whatever might emerge with a mallet. It is eerie because Mabry doesn’t decide for us who the eyes represent; the American military, us, our governments, or our psyches?

Elsewhere, another image, by Henning Wagenbreth, shows skeletons working in an office. It’s a nightmare vision of the working life so many people in the Western world seem to lead: eternally meaningless, immune to change, a kind of zombie Dilbert.

The lesson of these books seems to be this: that the most powerful protests are those that are felt most deeply, those that concern true inequities, true abuses. And that graphic finesse is unimportant. The Bosnians didn’t need Bruce Mau’s typography to make great posters.

For those of us who are lucky enough not to experience life and death problems, the difficulties with political expression are more convoluted. Just because you use shocking imagery and harsh words doesn’t make your protest political. Just because you bang the table hard, doesn’t mean what you say is profound. More valid is to ask, ‘What are you protesting about?’ ‘Why?’ In the words of eminent US political design theorist Sheila Levrant de Bretteville, designers have to think hard about what they are trying to achieve, ‘taste and style just aren’t enough’.

Graphic Agitation 2 – Social and Political Graphics in the Digital Age, by Liz McQuiston is published on 19 July by Phaidon, priced £35.

Empire – Nozone IX, edited by Nicholas Blechman, is published by Princeton Architectural Press, priced £14, and is out now

Revenues up for WPP Group