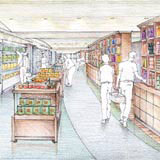 E H Booths, the North of England, family-owned supermarket chain, is working with Jestico & Whiles to create interior designs for a forthcoming retail and dining concept.

The initiative is set to be trialled at a store being built in Kendal, Cumbria, and there are plans to extend the format to other sites if it proves successful.

‘Booths wanted to offer the finer foods of the regions [it serves], as these products often don’t get noticed in the larger outlets. The store will be much smaller scale than the existing supermarkets; more like a deli,’ she says.

The design proposition for the outlet is a complete departure from the 25 existing Booths supermarkets, according to Torbarina. ‘It is not just a retail space, so we created something more sophisticated, more charming,’ she explains. ‘It is intended to be a place where people will sample the local produce.’

Jestico & Whiles has been working on the project since March, when it successfully won a pitch for the contract. The outlet is now under construction and is scheduled to open in November.