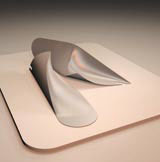 ‘I deliberately tried to avoid being smutty,’ explains Finn. ‘It’s all very subtle, though sometimes I had to push it a bit because of the student target audience.’ Finn joins Leeds group Elmwood later this month as a junior designer.

D&AD-shortlisted student Marta Lago Arenas is completing an MA in Industrial Design Engineering at the RCA. The 29-year-old Spaniard also has a mechanical engineering degree and a two-year stint as a design engineer at Mercedes Benz under her belt.

Her set of disposable plastic cutlery has been shortlisted in the product design category. She believes plastic cutlery is created in a ‘bad imitation of the language of metal’. Her solution was to create tubular-shaped cutlery, avoiding square sections, which optimises the material’s properties to create a tactile, ergonomically sound product.

Visual appeal was also important. A knife, fork and spoon nest together as one object. ‘I wanted to create something disposable that people don’t want to dispose of,’ she adds.

He says he looked to children’s toys for inspiration, to access ‘the curiosity of a child and the feeling of childish excitement’ and transplant these qualities to the departure lounge, an area of airports rarely associated with pleasure.

According to Lee, ‘International travel is all about going to new places and experiencing new things, but now that we all travel regularly much of the novelty has worn off. The folly is all about putting excitement and fun into the departure lounge.’

Based on an assumed legalisation of Class A drugs such as cocaine and heroin, Hansen has created luxury packaging for each, reminiscent of exclusive cosmetics. Each drug is packaged under a fictional umbrella brand name – Elysian Fields – with individual brand names: Ecstasy becomes Bliss No.07, cocaine Euphoric Rain and heroin Numero Uno. Undu Graduates is held at Atlantis Gallery, Truman Brewery, Brick Lane, London E1, from 8 to 11 July

The RCA/NGT Awards entries can be seen at The Show: Two, Royal College of Art, Kensington Gore, London SW7 until 4 July