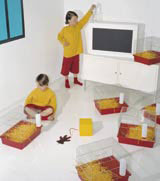 But most exhibits are games. KRD/Robson & Jones’ Energy Shut Down is a pneumatically-operated city of tower blocks that rise up and illuminate when switched on, using the city as a metaphor for energy. The aim of the four-player game is to retain the most energy, with players battling to rescue the city engineer from a lift and working to keep hospital patients alive.

Blast Theory’s installation on future energy sources and their impact on the built environment rises up from the floor like a periscope. Handles on the side operate a touch-screen with a turning diorama that children use as part of the energy detective game.

But the most dramatic of them all is Moeller’s subversive electric-shock-generating totem, Do Not Touchâ€š which illustrates (safely) the power and danger of energy.

Interactive exhibitions have the potential to flop when they break down, as demonstrated at the Millennium Dome. But the museum is confident that the Energy Gallery will stand the pace and meet its visitor targets.

‘The trick is the balance between something that’s robust and something where learning outcomes are rich,’ says Molloy. Exhibits have to meet the gallery’s five- to ten-year lifespan.

‘Some of my team have spent ages playing in the name of testing. We all tried to break [the exhibits],’ says Redler. They’ll soon be put to the real, acid test of hordes of marauding children when the gallery opens to the public.

Do Not Touch – Christian Moeller

Is This Your Energy Future? – Dunne & Raby

World Energy: What does the future hold? – Plant