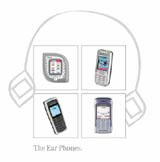 Mobile communications giant T-Mobile this week unveils its Mobile Jukebox service, which will enable users from this month to browse, download, store and play digital music tracks on their handsets.

‘With this, you only need one device, whereas with other services, you’d need to buy a separate device. It’s a new way to download music in real time,’ he explains. Munro says he briefed Brand Bank Communications to devise an identity for Ear Phones that people could visualise. ‘We wanted something that would be iconic and would set us apart,’ he says.

Consultancy creative director Ghilly Raku says the Ear Phones logo ‘seemed like a nice generic name to sum up the services, which are essentially turning phones into ear phones.’

Initial applications for the visual identity include press launch invitations, folders and usage guides, with further rollout later this year. Brand Bank Communications won the work, worth a five-figure fee, on the back of its existing relationship with T-Mobile.

Mobile Jukebox launches with 500 remixed songs from T-Mobile partners Universal Music, Sony Music and Warner Music’s catalogues. Users should have access to 250 000 tunes by the end of the year.