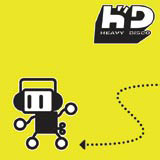 Tanuki uses urban and technology imagery and a mascot robot figure as a key identifier for the label. ‘We didn’t want the design to be alienating – images of guns and the street – but we did want a fresh, urban and technological feel,’ says label manager Hal Ritson.

Ritson considered ‘typical’ dance-record designers before selecting Tanuki. ‘We were already massive fans of Tanuki Design. We wanted a mascot, and this fitted well with the Japanese paradigm of creating mascot characters.’ ‘The robot illustrates the “electro” side of Heavy Disco’s music,’ says Utku Kaplan, project leader at Tanuki Design. ‘We now hope to work with [the label] to create animations with this character.’

Heavy Disco’s first release is the Helsinki Breaks Out EP, a collection of breakbeat tracks from Finnish artists. The sleeve for this and future releases will trade heavily on the label’s image. ‘The label brand should be seen as a seal of trust. The sleeves will be branded as two-thirds Heavy Disco, one-third the artist,’ says Ritson.