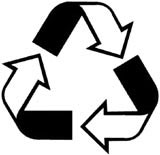 I was interested to see Leigh Maude’s letter (DW 28 April) asking about the origins of the three-arrow recycling logo.

This logo was created in the late 1960s or early 1970s by my cousin William J Lloyd while he was working with Container Corp.

Lloyd, who died in 1995, was a nationally known graphic designer in the US, and founder of Lloydesign Associates of Chicago. A graduate of Indiana University, he won numerous awards over the years for his design work.

The universal acceptance of his recycling logo is testimony to his design skills.