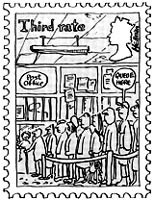 While crossing the street last week I was struck by a thought. Are there two Royal Mails?

My mind had been prompted in this by the fact that I was – for once – walking from one side of a road in London to the other without having to leap out of the way of a red-blooded delivery van. Quite how so many of Postman Pat’s colleagues have managed to drive so obnoxiously for so long is beyond me. It wouldn’t surprise me to learn that the drivers’ training programme involves watching Wacky Races cartoons and playing the computer game Carmageddon.

Come to think of it, it’s strange how many of the drivers look like Dick Dastardly in a postie’s uniform (jeans, billowing light blue shirt, evil shades) and how many of their postie-passengers chuckle and chortle just like his canine sidekick Muttley.

These manic vans seem strangely at odds with the other Royal Mail – the gentle, learned provider of first day covers; the insightful client which enabled CDT Design to create such wonderful work with so many artists for the millennium stamps last year; the organisation which has protected the heritage of its wonderful post boxes; the excellent advertiser on TV and in print; the organisation that manages the incredible feat of delivering so many badly addressed bits of paper to so many addresses six days a week.

The vans have much more in common with the ugliness of London’s Mount Pleasant sorting office, the starkness of its corporate offices in Old Street, and the unkempt post offices you so often encounter – those joyless interfaces between a queuing public and terse employees. Think of an ink-less, chewed ball point pen, attached to a post office desk by a chain and glue – that is the other Royal Mail.

The Royal Mail probably has a first-class corporate communications programme. It probably has all sorts of nice people giving talks to school children about philately and why the Queen has never found it odd that every day millions of people lick behind her ears. It probably also sends out lots of information packs to journalists and politicians and other people who have access to the public’s attention. But what has happened to its sensitivity to communications when it comes to the everyday – the vans, the shops, the employees’ environments?

For example, why is there no easy-to-remember hotline number through which you can report cases of pedestrian-scattering vehicular stupidity? Why don’t vans have unique and easy-to-remember ID numbers? (If you wish to complain, you need to note down the registration of the van and find the Customer Services Helpline in the phone book or, if you can bear to, search for it in your local post office.) I could go on. Why does such a huge user of vehicles have no clearly stated environmental policy on its vehicles, for example?

Why pick on the Royal Mail? Because it is a national organisation that should reflect what’s best about being British. When it fails to do that we should care. But there’s something else here. The Royal Mail’s schizophrenia annoys me because it presents its nice face to the world when it wants to raise its profile (advertising, design and the like), but lets its arse hang out when it comes to delivering many of its services to real people. Surely, this is yet another example of an organisation investing too much in image and not enough in substance?

My remarks on the Made in the South West/Stand Up Stand Out campaign to promote the image of businesses in the South West of England appear to have caused something of a stir in the Scrumpybelt.

My key point was very simple: excellent commercial companies should focus on promoting themselves instead of trying to raise the profile of all the businesses in their region.

Roger Proctor, one of the architects behind the Made in the South West campaign, reveals “those of us fortunate enough to live and work in the South West can maybe feel a little smug” (Letters, DW 19 May). Why so? Because, he says, it’s really nice down there but they can also do good work for national and international clients (it isn’t clear whether he includes Wales in the former or the latter).

My confusion grows; if the situation is so good that you are able to feel smug, what are you campaigning for?

What exactly is it that companies in the South West need – bigger and better business deals or a pat on the head? I am confused.