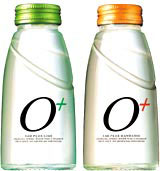 UK design groups have produced some outstanding results at the inaugural design competition of The Clio Awards in New York, winning three golds and three silvers.

Established in 1959, The Clios claim to be the world’s largest advertising awards. Organisers have this year formally recognised design as a separate discipline for the first time – it previously fell within advertising categories.

“Design is an important form of branding and promotion in today’s marketplace,” says The Clio Awards executive director Andrew Jaffe. “We felt we could not adequately honour the creative arts as applied to advertising and marketing, without having a fully-fledged international design competition.”

Split into packaging, print and corporate identity, a total of six golds were awarded at last week’s event. Wickens Tutt Southgate and Blackburn’s won one each, for their packaging of Heal’s bath and shower range and flavoured springwater O+ respectively.

Chairman of the jury and Turner Duckworth co-founder David Turner says: “Many winners took away the first Clio ever awarded in their category, making them among the first in the new millennium.”