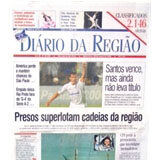 The project is being handled from London consultancy Crozier Associates, where Crozier is editorial director, and is in the early stages of development, with a relaunch expected later in the summer.

According to Crozier, this commission presents a unique design challenge because the paper is peculiarly tall and narrow, as a result of action by the Brazilian government in 1998 to reduce the size of all broadsheet newspapers by one column width to save resources.

‘Now it is a “thinloid” and this is a very odd shape to work with,’ he says. ‘They can’t really change the shape, because of the costs of altering the presses.’

As readers will fold the paper down the middle, the plan is to create two front pages – one on each of the two halves, says Crozier.

‘But I’ve got to also try and make them link up, to create one front page,’ he adds.

The paper has eight sections and Crozier has been briefed to make the front page of each ‘more competitive in the space available’.

The redesign is partly a response to the recent launch of a rival title in the city – Bom Dia – as well as the enforced format change.

Crozier created the previous design for Diário da Região in 1998, just before it was reduced in width. The present dimensions are 320mm wide by 580mm tall.

All of Us helps Tate to get interactive