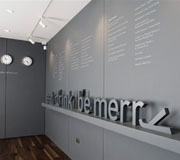 The development is run by Land Securities as part of the company’s Capital Commitment division in London and will offer more than 85 000m2 of office and retail space, organised around three landmark buildings conceived by architect Allies & Morrison. Hat Trick’s branding is built around the theme of triplets, using phrases such as ‘work, rest, play’ and ‘here, there, everywhere’. This makes reference to the three primary sites of the development on the south bank of the River Thames.

Hat Trick sits on Land Securities’ design roster and was appointed to the project last summer. It has developed the identity, brochures and promotional materials, as well as imagery for the on-site marketing suite, which opened last week. Photographers Matt Stuart and John Ross were commissioned to produce images for the project, and roster consultancy Bounce Digital designed the website at www.bankside123.co.uk.

According to Hat Trick creative director Jim Sutherland, the marketing suite has been opened on-site to entice potential tenants to the location. ‘The river is still viewed as a quite a barrier for some companies, such as financial institutions, so this brings them to the site,’ he says.

The scheme includes a central 5575m2 retail and leisure area called The Gallery, for which GBH is designing the branding and marketing material.

Bankside 123 will also house the relocated Architecture Foundation headquarters, inside a Zaha Hadid-designed building to be constructed on the site.

Shame on you, Gradwell