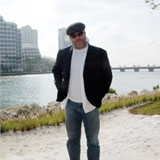 Philippe Starck was awarded the D&AD President’s Award by Dick Powell last week for his ‘outstanding contribution to the world of creativity’. Starck was applauded by guests including Jason Donovan, the star of a Virgin campaign, and presenter Graham Norton, who hosted the show. D&AD has also revealed plans to extend its reach further into the regions and the charity is aiming to announce a second regional hub, possibly in Scotland this September.