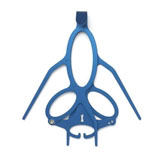 Car manufacturer Vauxhall is relaunching its VX Collective with six new recruits – including a food writer and a journalist – suggesting the group is embarking on an alternative direction as it seeks to broaden its creative offering.

The collective is now beefed up to eleven members. The new recruits join five out of the original six members: product designer Sam Buxton; film-maker Lucia Helenka; DJ Ross Allen; pro-skateboarder Pete King and fashion designer Giles Deacon, who is now taking more of a back seat, according to a spokeswoman for the VX Collective. James Thompson, VX racing driver, quit the collective towards the end of 2003.

The move to expand the collective comes as its numbers were beginning to dwindle (DW 16 February). A spokeswoman claims that further appointments will be made in the future. ‘The growth will be organic. We do want to create a vast network of creative talent. We encourage people to get in touch with us, but don’t expect to recruit any new members for about a year,’ she says.

The members are in talks over future projects. Miers, winner of Masterchef Goes Large, is exploring ideas of ‘healthy eating on the go’ when driving, while interior design consultancy Precious McBane is looking at concepts for car interiors.

Previous projects include a series of coat hangers designed by Sam Buxton (pictured).