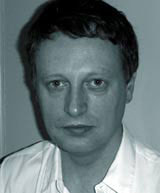 1989 Graduated Royal College of Art with MA in design history

Believe it or not, London has never staged a design festival. There’s 100% Design, Designersblock and London Open House, but no full-scale, multidisciplinary celebratory bash. For a city that prides itself, at home and abroad, on its creative reputation, that’s a bit of a poor show.

The London Design Festival 2003 will be welcomed, therefore, by those who believe we should have had one years ago. Come 20 September, the city will be buzzing with exhibitions, receptions, seminars, screenings, lectures, openings and parties – if festival director Ben Evans is to be believed.

Evans is the lively face behind distinguished festival frontman John Sorrell, who is its chairman. Wearing label jeans and a red shirt, he is a little bit woo, with an endearing disregard for pronouncing his th’s and a sunny laugh. Sorrell bounced the idea off him when the two met for a drink a few years ago.

‘We’d worked together in the past, and I thought [the festival] was potentially a runner because an event of this sort seemed to be absent from London. We had a real desire to open better dialogues between the design industry and business,’ he says.

The two started cautiously, sounding out organisations for potential interest. ‘Initially, it was like asking people “If you were offered a medal, would you accept it?”. We needed the endorsement of others. But people have been prepared to put their name to it and they’ve been its backbone ever since,’ he says. This impressive roll-call includes the British Council, Trade Partners UK, the National Endowment for Science, Technology and the Arts, the Design Council and Channel 4, among others.

The festival is a pilot and Evans is conscious of managing expectations. ‘We don’t want to overpromote it,’ he says. ‘We’re aware that some things will go well and others won’t. But it’s not going to fizzle out after a year. Even though it’s a pilot, people still expect it to be good.’

Evans may be better steeled for any failure than many. He worked on the Millennium Dome as content editor from 1997 to its opening, leading the development of the exhibition areas.

He is frank about its shortcomings. ‘The Dome became too politicised and a section of the media could do nothing but hate it. It had a calamitous opening night and was very expensive. But it was a great experience – history will be kinder to it,’ he says.

He’s also well versed in the art of spin. Working for the Labour Party, he accompanied Neil Kinnock in 1992 and Tony Blair in 1997 on all their Election campaign trail visits, ensuring the message of each day was reflected in the following day’s papers.

‘It was harder in 1992 than 1997,’ Evans laughs. ‘In 1992 it was an emerging discipline, learned from the Americans who were past masters. People were out to get Kinnock, and set up traps – inky hand shakes, ice-creams and the like – which I had to try to stop.’

It all sounds a bit Boy’s Own. Indeed, the experience was fascinating, he says, and also allowed him to fufil his ‘boyhood dream’ of travelling with police outriders.

More importantly, particularly for his current day job, the work gave him experience working as part of a well-oiled, functioning team. ‘The campaign visits were run with military precision, and everyone was utterly reliable. Now, with the festival, one of our major assets is the strength of our team. If you get that right, you can do anything,’ he says.

If you get it wrong, however, things can fall apart. With others, Evans founded branding and marketing consultancy Live in 2000, but parted company with his co-founders and sold his share in it two years later. ‘I realised you must start a business with the right people. We didn’t agree and it became an issue,’ he says.

But leaving Live behind gave him the financial wherewithal to invest time in the festival’s early planning without earning money. As 2002 progressed, he says, it became clear the work would be a full-time job. It took shape in the autumn, which was when he and Sorrell decided to go for it and started building a larger team.

They invited Vince Frost to create the festival’s ‘timeless’ red logo – an identity which other organisations would be ‘happy to feature alongside theirs’. Evans and his team share an office in a former school in back-street Clerkenwell with Frost Design and The Sorrell Foundation.

Now, following the official launch of the festival last month, Evans is concentrating on the finer details and still talking to organisations to get them involved. ‘There’s around ten companies we’re still working out, and then that’s probably enough for this year. The quality threshold is terribly important,’ he says.

Evans’ self-confessed ‘portfolio career’ may not appeal to those craving the security of a long-term job, but it has given him invaluable experience. He wrote the Labour Party’s first national design policy (‘the first for any party’, he says proudly) and drafted the party’s cultural policy with film producer Lord Puttnam.

‘I can apply my experience to what I’m doing now. I’ve learned what not to do and think big and go for it. You can pull things off. People have told me the festival is wildly ambitious, and it is, but with the right team and support, it can happen,’ he says.

And who knows, before long, it could be an established part of the cultural calendar. By which time, of course, Evans will have moved on.