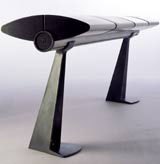 Public seating frequently surrounds us. More often than not, we take it for granted, as we slouch on seats waiting for the next flight, or fidget on them during a particularly gripping scene at the cinema.

Considering that most public seating has a lifespan of about 20 years, has a reputation for being poorly maintained and is often found in places that people pass through rather than stay, it’s hardly surprising that design is not high on the agenda of either the seating’s commissioner or its sitting public.

Yet it really should be, as iconic gems such as the Tandem systems by Ray and Charles Eames and the Hille systems designed by Sir Robin Day demonstrate. On a larger scale, the flag for good British design in public seating has been kept flying by furniture entrepreneur and managing director of OMK Rodney Kinsman, Alan Zoeftig and, more recently, Terence Woodgate’s systems for furniture manufacturer SCP. These are the cases where comfort, longevity and versatility are considered paramount, creating a welcoming environment for the masses. Models that can work and be adapted according to spaces, from a train station, to a bus stop or a hospital.

The bulk of public seating is produced for airport waiting lounges, large-scale projects that can take over three years to complete. Once installed, constant use may mean regular maintenance, new upholstery and substitution of parts. ‘Most airport seats are a 24-hour service,’ says Kinsman. ‘They have to survive for 25 years, 24 hours a day.’ OMK guarantees each system for ten years and offers a back-up service, going back on-site after a year and re-evaluating the systems.

Kinsman says that few designers, apart from the Eames, have actually designed for airports, so most systems do not take into account e e all of the problems that airports produce.

‘A product needs to be customised and change according to how airports dramatically evolve,’ he says. ‘There might be a change of plan, new vending or catering areas introduced, so you’ll need to consider that the seats will be stained. The customer profile might change – the area might now provide for budget holidays or at the other spectrum, for luxury holidays. You need to have a kit-part mentality, so you can upgrade or downgrade the systems.’

Even more importantly, different airport areas have specific needs. John Small, project director with responsibilities for product design at architect Foster and Partners, recalls how in planning the public seating at Stansted Airport, the difference between the public area of landside and the more controlled airside zone was a factor. ‘In the airside area, the seats are more comfortable than in landside. This is where you have to allow for long waits and consider the issue of passengers sleeping on seats.’

Although Foster and Partners has never been in the situation of designing both building and public seating to go in it, Small warns that such commissions can often see the furniture get the short design straw. ‘When you allow an architect such as Ricardo Bofill in Barcelona to take his ideas into public seating it can be problem. Sometimes they are done as a one-off, you don’t have replacements, or if the airport expands, there will be a mismatch with new systems,’ he says.

Instead, the practice has used its experience at Stansted Airport and at the new Hong Kong Airport, to design the Airline seating system for Vitra in 1999. ‘We designed a product that could arrive on site and be fitted in a more simplified manner. We provided different dimensions of seatings, narrow versions, high or low backs that could be fitted according to the areas. The seating and the back are interchangeable so to aid maintenance and the beam spans a long distance with few legs so to allow [greater] visibility,’ says Small.

And in the wake of the 11 September’s terrorist attacks on America, visibility is just another element to add to airports security concerns. According to Kinsman, seating is terrorist-proof when ‘it can’t hide any luggage, and the materials don’t disintegrate into potential weapons’. As issues on travel safety become more pressing, health concerns are also influencing airport systems.

Zoeftig has found that concerns over deepvein thrombosis have affected his seating designs. He has developed a variation to his Zenky seating system that comes with both a footstool and a leg rest. ‘The idea being that you can rest while you wait before boarding the plane,’ says Zoeftig.

Another critical issue to consider in public seating for airports is cost. ‘Cost is important,’ says Kinsman. ‘This is a very competitive market and the value for money element is crucial. The manufacturing of the component parts is an expensive business so you need a high number of commissions to counterbalance.’

Considering that OMK will provide an average of 45 000 seats for large-scale projects, and that it is perceived as one of the leaders in the international market (along with other heavyweights such as Kusch & Co and Wilkhahn), you can see how it can break even.

Richard Leeks, director of SCP Contract, echoes Kinsman’s thinking. ‘To work with airports you have to be very serious and focused. It’s all about providing the right product for the right price,’ he says.

SCP has recently entered the public seating market with Woodgate’s Public Seating System and Public Seating System 2. Rather than large-scale airport projects, the company has focused on medium-sized jobs, such as town halls, county courts and museums. ‘In smaller environments clients are keener to look at products that make a statement, how they fit the area,’ says Leeks. Recent installations e

e include architect Jean Nouvel’s Palais de Justice in Nantes, France, for which the systems were customised in black, the new ExCel exhibition centre in London Docklands and the Capital’s Imperial War Museum.

Woodgate has also created the Symmetry system for Barcelona-based manufacturer Casas, a company that also offers public seating systems by Oscar Tusquets and specialises in airports, maritime and bus stations, and seating for auditoriums. Launched last year at Orgatec and still at a prototype stage, Symmetry is a tubular system where the seats and back rests have interchangeable parts, which are fixed to the structure bar without using screws to make assembling as easy as possible. Another Spanish manufacturer, Sellex, launched at this year’s Valencia Furniture Fair the sleek-looking Aero system designed by Lievore Altherr Molina. The bench is made in extruded aluminium, legs in stainless steel and comes with optional armrests and upholstery.

As demand for public seating grows, you can argue that there is only so much that can be innovated on the long bench beam system. Lower costs, new

materials and flexible audience needs will all help to determine small, but specific variations. Futuristic-sounding uses could envisage catering for business travellers and attaching workstation facilities to the public seating systems, but the reality is that most systems are still trying to cater for basic, but ill-considered, needs, such the ability to clean the systems easily by designing a gap between the seat and the backrest. In public seating, functionality needs to be the driving force of design.

Perhaps the most significant development can be found again at OMK with the Trax MK2 model. Born out of the complaints of many clients that seats were being vandalised, Kinsman found that broken suitcases, wheels and trolleys, which cut into the seats with the sharpness of a razor, were instead damaging most systems. The solution has been to provide seats covered in moulded polyurethane rubber, a material that is weatherproof, self-healing from wear and tear and coloured all the way through. So far, the seats have been put to test in the US and are being implemented at New York’s JFK Airport, in a quest for that perfect combination of longevity, versatility and cost effectiveness.

As Kinsman puts it, ‘Design that works is as important as design that is beautiful.’