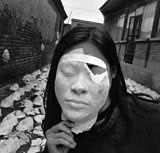 Stuart Franklin’s amazing grainy black and white photograph of a protester in Tiananmen standing in the path of a column of tanks is the first image that springs to mind when I think of China. The second is Thomas Struth’s large format colour urban landscape of the new Shanghai.

China in the 21st century is a place of massive contradictions and cultural upheaval, undergoing seismic social shifts as it motors into the modern world, accompanied by a significant cultural undertow.

Bringing these fascinating developments into sharp focus is a new exhibition, Between Past and Future: New Photography and Video from China, at London’s Victoria & Albert Museum this autumn. The London display is an edited version of a much larger show at New York’s International Center for Photography and the David and Alfred Smart Museum of Art at the University of Chicago.

It was only last year that the Photographers’ Gallery in London showed two contrasting and powerfully different visions of 20th century China. But this show at the V&A presents another view of China altogether. It’s billed as ‘the first comprehensive survey of Chinese photography and video from the past decade’, showcasing ‘the vivid responses of a new generation of Chinese photographers and video artists to the rapid cultural, political, social and economic changes taking place in China’. Some 40 photographers are included, covering both rising stars and established artists. The work is grouped into four distinct sections: History and Memory, Performing the Self, Re-imagining the Body and People and Place. 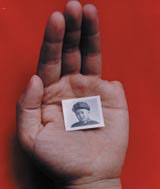 Liu Zheng’s work is the most immediately attractive, not least because of its political content and the fact that its lineage is instantly apparent. There are echoes of Weegee, sprinklings of August Sander, traces of Hiroshi Sugimoto, with a massive dose of Diane Arbus (whose work is the subject of another upcoming show at the V&A). Not that Zheng’s work is derivative – but it is a heady cocktail of influences that combine to powerful effect. Check out Zheng’s recently published The Chinese to experience the full-strength version.

Elsewhere in the History and Memory section there are more conceptual pieces – Cui Xiuwen’s video or Xing Danwen’s lightweight pregnant female nudes with crude political juxtapositions. Performing the Self treads a perilous line between pretension and content. Few pieces of work strike the right balance. Perhaps it’s a case of trying too hard to impress. However, Zhu Ming’s work is genuinely disturbing and highly memorable.

Re-imagining the Body offers a range of visual strategies, or wannabe conceptual noodlings, depending on your point of view. Rong Rong’s work is certainly disquieting and effective.

While the exhibition is not supported by Chinese officialdom, neither is it oppositional. In a way, the show is marketing ideas about modern China, albeit through the filter of American curatorial taste.

As its title suggests, the exhibition is a work-in-progress statement with a definite sense that there’s a lot more to come – including the promise of less sanitised and ‘official’ views. Given China’s ascent to global superpower status, engaging with its culture is clearly important. This show makes a measured contribution to that process, but leaves plenty of room for other views on China.

It’s unfortunate that the V&A has had to edit the original show due to space constraints, but the book published to coincide with the show offers a wealth of fascinating material, including a rumination on the nature of photography by Rong Rong. He suggests that ‘what’s left of the world is merely a picture or two’. There’s a thought.

Between Past and Future/ New Photography and Video from China runs from 15 September to 15 January 2006 at the Victoria & Albert Museum, Cromwell Road, London SW7 Tel/ 020 7942 2000. The accompanying book is published by Steidl, priced £30.