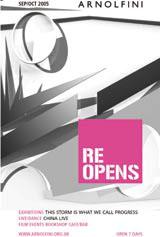 A host of designers and artists has contributed to a programme of redevelopment and expansion at Bristol contemporary arts centre Arnolfini, which finally reopens next weekend.

The two-year project has extended the venue’s galleries and project spaces, under a scheme created by architect Snell Associates. Improvements to the layout of its four floors and five galleries have been put in place to aid visitor navigation.

The venue’s internal wayfinding and signage system has been created by Holmes Wood. Glasgow consultancy D8 has designed the centre’s brand identity, drawing up the primary marque, colour palette and all stationery ‘from scratch’, according to partner James Young. The group was appointed to the work following a pitch in autumn last year.

The Arnolfini signage draws on the key ‘square’ element of D8’s identity design. Holmes Wood was appointed to the project after a four-way credentials presentation and developed the wayfinding in conjunction with project artist Susanna Heron, according to consultancy director Alex Wood.

The venue’s café-bar has been overhauled under a design by artist Bruce McLean, who created the original bar in the 1980s. In addition to gallery improvements and extensions, the centre has added an education centre, an extra 60-seater studio, library and archive area. The changes will allow the Arnolfini to widen the range of projects it can present, as well as create the conditions to bring fragile and precious artworks to the region.

The redevelopment project at Bush House began in 2001, when the freehold was acquired for £6.25m. The internal refurbishment, led by Snell Associates, began in September 2003, when the venue closed to the public.

The centre reopens on 10 September with an exhibition titled, ‘This storm is what we call progress’, a multimedia collection focusing on themes of memory and time. Print materials for the show are designed by Bristol group Thirteen, extending the brand identity created by D8.

College tutors need to stand up and be counted