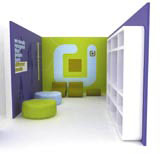 The first phase of the work was seen at the company’s 300-strong call centre in Stevenage last week, ahead of the launch of the identity this week.

According to Home Choice creative director Marco Giusti, who commissioned Brody to produce the branding in April, the ‘crucial thing about the new work is that it places Home Choice at the centre of the home’.

The company chose to implement the visual identity in its call centre because it saw the need to communicate the new brand internally, ‘particularly among staff at the call centre who are our voice [to customers],’ adds Giusti.

Brody’s marque ‘loosely reflects the plan of the room’, with a square in the middle, says Giusti. It can be represented in any mix of ten colours and Fold 7 has referenced both colours and shapes in its designs.

Areas within the building have been renamed to reflect the focus on the home: the canteen, for example, is now known as the living room. The space features pillars painted in brand colours, and boards with key brand messages have been introduced, along with a picture wall showing photographs of the local Stevenage area.

In the sales space, the interiors aim to ‘create a sense of competition’, says Fold 7 managing director Simon Packer. There’s a pool table and other games, while scoreboards highlight sales targets and achievements.

‘Its about engaging staff in the workspaces,’ adds Packer. ‘We’re trying to energise them and make them feel great about the space.’ Fold 7 has also commissioned bespoke furniture and sourced pieces with a ‘strong design aesthetic’, says Packer.