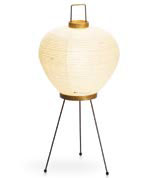 Prior to the post-World War II cultural influences that the West introduced to Japan, the country was rather devoid of furniture as we know it today. Traditionally, flooring was made of woven straw ‘tatami’ mats; people sat on cushions at low-level tables and slept on hard mattresses on the floor. The home was – and to a large extent still is – a private and rather personal place reserved for the family, rather than entertaining friends. Attitudes began to change in the 1950s, when the Western idea of chairs and dining tables, raised beds and curtains started to infiltrate Japanese homes, resulting in a rather bizarre mix of styles. More recently, the Western concept of ‘lifestyle’ has entered the mindsets of the younger market.

Design retailers have been feeding this desire in Japan – with the increasing import of Europe’s leading furniture and lighting brands. However, furniture exports have remained modest, due partly to high shipping costs, a wobbly economy and a hesitancy about entering the established and highly competitive market of the West. There are signs of change, however, with companies like Muji, Yamagiwa and Next Maruni recently showing collections to the crucial international trade audience at the Milan Furniture Fair.

In that audience was James Mair, managing director of London-based furniture company Viaduct, who says he is drawn by ‘the lightness of touch in Japanese design, its purity of thought, and honest use of materials’, and decided to stage an exhibition of Japanese furniture design at his Clerkenwell showrooms as part of the 100% Guaranteed fringe events.

While Mair is full of praise for Next Maruni’s collection of chairs designed by a role call of international and domestic names, including Jasper Morrison, Harri Koskinen, the Azumis, Naoto Fukasawa, Shigeru Uchida, and Alberto Meda, he says shipping costs make them prohibitively expensive for the UK market and they’re not in the show.

So the curatorial remit of Unfold Japan focuses on Japanese designers rather than manufacturers. The dozen or so names on show were selected to represent the country’s diversity across a century, from the early grand masters Isamu Noguchi (1904-1988), Sori Yanagi (born 1915), and Shiro Kuramata (1931-1991) to the current generation, including Tokujin Yoshioka, Kazuyo Sejima, Fukasawa, British-based design group Azumi and newcomer Yosuke Watanabe. The exhibits illustrate the confident application of materials for which the Japanese have become known – Akari paper Light Sculptures by Noguchi and plastic Elephant stools by Yanagi for Vitra, Kiss Me Goodbye clear acrylic chairs by Yoshioka for Driade, Muku wood chairs, stool and table, and a giant leather pebble footstool by Fukasawa for Driade.

Polypropylene and aluminium, celebrated materials familiar in many Muji collections, feature in the successful Tokyo Pop furniture range by Yoshioka for Driade, and the Azumi’s bestselling LEM barstool for La Palma. But the pièce de resistance has to be Yoshioka’s rare prototype Honey Pop chair, made from a surprisingly strong concertina construction, created from a two-dimensional build-up of 120 pieces of glassine paper that are glued together and precisely cut. The structure is then ‘opened’, forming a strong, three-dimensional honeycomb structure. The chair makes both a satisfying and disconcerting crunching sound as it custom moulds to the shape of the person who sits on it. This item typifies the Japanese furniture designer’s rigorous simplicity, but there is also an urge to experiment with new materials and introduce a sense of playfulness to the whole process, combining confident material exploration with a fragility of construction that lends purity, charm, quirkiness and, above all, sophistication.

Take a bite out of a rare breed

College tutors need to stand up and be counted

WMH flavour for Sainsbury’s So packaging