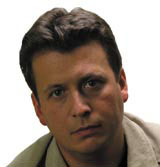 Third-generation Italian designer Robert Radi has run his product design business out of Beverly Hills for 12 years, and sees many benefits from being wedged between Rodeo Drive and Hollywood. A number of his clients are based in or around Los Angeles, part of the cosmetics industry has its home in the Hills (where else would you get to design a personal microdermabrasion device?) and his studio is just a ten-minute drive from his home.

Radi Design is a well-established outfit with a string of awards to its name. Most recently, Radi was shortlisted for Germany’s DesignPreis 2006, which announces its winner next February.

However, things were tough at the outset. ‘Back in 1993, the US was going into recession and there wasn’t much work to be found,’ says Radi. To make ends meet he began freelancing for other consultancies, as well as directly for clients. One of his first jobs was for a manufacturer of security systems, but his first big break came in 1996, when he worked on a 27-passenger flight simulation ride for Paramount’s Star Trek – The Experience.

Since then, he’s designed household goods, consumer electronics, cosmetics products (‘The cosmetics industry has been very kind to me,’ he says) and eyewear. It’s his Razorback F Active Eyewear Goggle, which uses military-derived anti-fogging technology, that has picked up the DesignPreis nomination.

‘You have to approach people,’ he says of drumming up business. ‘It’s my duty to get them to know about us. We always approach the companies we want to work for, follow up that contact and keep ourselves ready if it materialises into a project.’

‘The big names are nice, but I also look for companies with potential, when they reach a point when they’re ready to use design,’ he says. Such clients include Vyken Eyewear, Mobi (which makes juvenile-targeted equipment), Aroma Houseware and office products company TwinRay.

But it’s not all about design consultancy. Radi’s plan is to create a hybrid business, offering consultancy and products for sale. He already offers limited edition Razorback Quadra skiing goggles for sale on his website, soon to be followed by limited edition sunglasses.

The on-line sales offer was launched last year, and so far it’s breaking even. ‘It helps me to live with the product,’ Radi explains. ‘It keeps me a little bit sharper and helps me to serve the client better.’

Radi’s approach to clients seems focused and professional, but the studio gives the impression of being rather less structured. He has no interest in formulating a business strategy. ‘If we have a business plan, we miss opportunities right and left,’ he says. Furthermore, he believes in self-sustained growth ‘rather than searching for investors’.

This growth is achieved by running a tight ship of just three or so staff at any one time, most of whom tend to be his students – he’s a part-time professor at Otis College of Art and Design, also in Los Angeles.

Keeping things small means that Radi stays hands-on. ‘I never wanted to be a manager, I always wanted to be a designer. I want to be talking to the client. If I ran a bigger studio, how could I promise each client that I’m on their project?’

That philosophy will be familiar enough to many people who set up their own business, but few would be so honest about the culture within the studio. ‘It’s not really a democracy here,’ he admits. ‘The overall design and direction always comes from me,’ he says, pointing out that it’s his name above the door and hence his reputation that’s on the line. His honesty goes even further: ‘I’m not easy to work with,’ he admits. ‘I’m picky with reason, because it’s better that we suffer within the walls of the studio than in front of the client.’

Pringle has plans for RIBA presidency